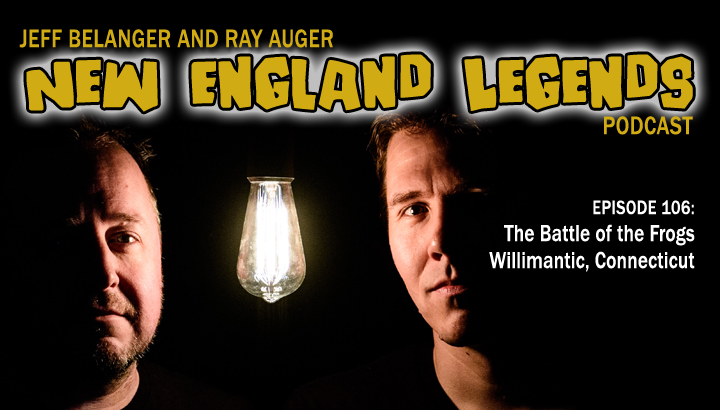 In Episode 106, Jeff Belanger and Ray Auger stroll downtown Willimantic, and nearby Windham, Connecticut, is search of a French and Indian War battle site that left thousands dead in July of 1758. The region has never forgotten, nor will it ever forgive those responsible for the slaughter. There are monuments to the battle, an opera written about it, and since September of 2000, a Willimantic bridge even tips its hat to those responsible lest we ever forget. 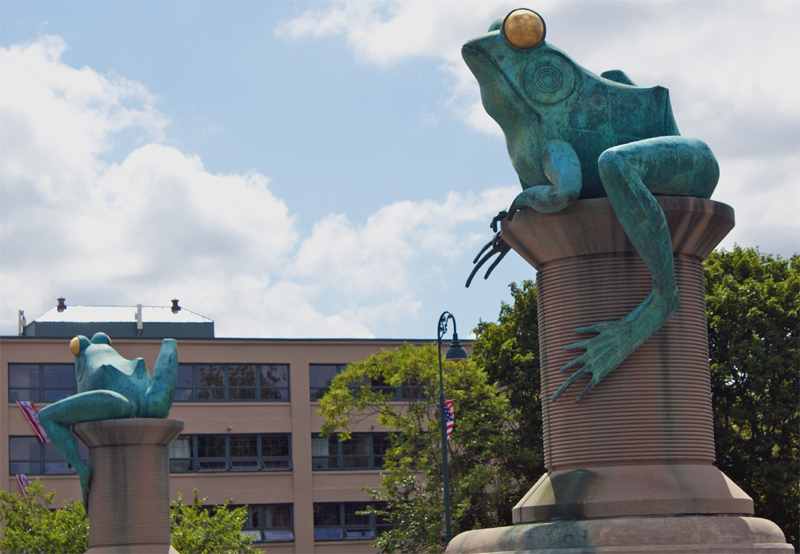 JEFF: It is, Ray. Let’s head over to the South Street Bridge that spans the Willimantic River. I want to check something out.

RAY: Okay, I see the bridge. It looks like a pretty normal bridge.

JEFF: Right, that’s why I brought this flashlight.

[SFX CLICK]
JEFF: Check out these pillars here at the end of the bridge.

JEFF: There’s four of them, one on each corner, plus more empty pillars down the sides. Those frogs are here to commemorate a mighty battle during the French and Indian War. We’re here to find the site of the Battle of the Frogs.

RAY: And I’m Ray Auger. Welcome to episode 106 of the New England Legends podcast. If you give us about ten minutes, we’ll give you something strange to talk about today. Thanks for joining us on our mission to chronicle every legend in New England one week and one story at a time.

JEFF: A big thank you to our patreon patrons, who are sponsoring this week’s episode. If you go to patreon.com/newenglandlegends, for as little as $3 bucks per month you’ll get early access to new episodes, plus bonus episodes that no one else gets to hear. We couldn’t do this without you guys. If you aren’t already a patron and you’d like to make a bigger commitment to the cause, we can do even more to bring you new stories each week.

RAY: And if you don’t already subscribe to our show, do it, because it’s free. You can find us on Apple Podcasts, Stitcher, Spotify, Google Play, iHeartRadio, or wherever you get your podcasts.

JEFF: Also consider joining our super-secret Facebook group, where hundreds of other legend seekers are sharing stories all the time.

RAY: So Jeff, we’re looking for the site of the Battle of the Frogs during the French and Indian war?

RAY: Okay, wait a minute. My family heritage is French-Canadian, I know yours is too. Is someone making fun of some French battle site here or what?

JEFF: (LAUGHING) Right, “frog” being a derogatory word for a Frenchman. I can tell you the French are involved. So let’s head back to the summer of 1758, we’ll travel about four miles east of here to the village of Old Windham, and set this up.

JEFF: It’s also a period of bloody war. The French and Indian War began four years ago in 1754. What’s happening is England is trying to expand its presence and influence here in the colonies, and France is trying to do the same thing to the north in a place called New France. The border between British colonies and French colonies is not well defined, and always moving, so that leads to tension.

RAY: Tension that comes to a head when the French construct a series of forts in the upper Ohio River valley. So British forces led by Lieutenant Colonel George Washington were tasked with kicking out the French. Washington and his troops were outnumbered and defeated. It there in the Ohio River Valley that tension turned to a skirmish, and a skirmish turned into a war.

JEFF: In 1755, Connecticut authorities mobilized their militia because this war doesn’t look like it’s going to have a quick conclusion. The French have formed alliances with Native people from the north like the Wabanaki Confederacy, plus the Ojibwa, Shawnee, Algonquin, and Ottawa peoples just to name a few, and the British have joined forces with the Iroquois Confederacy and the Cherokee. This is a war about borders and resources. Considering the King Philip’s War that took place almost a century ago, native people understand that if they don’t pick the winning side, their days on their homeland are numbered.

RAY: So by July of 1758, this war has been raging for four years. Connecticut troops are active in battles in nearby New York State, and they’re busy watching their own borders because the French have made some bloody incursions into the state’s northern section. Plus, the price tag for this whole war effort is becoming a huge burden on England. And now we add in another big problem. We’ve been in a drought here in the region of Old Windham. Crops and farms are struggling. Food is needed for the war effort. And people are scared.

JEFF: But then something happens late one afternoon in July.

[SFX DISTANT THUNDER]
JEFF: A storm begins in the distance. And then.

[SFX DOWNPOUR RAIN]
JEFF: Some much-needed rain soaks the town. By the evening, the rain lets up, and tapers off. It’s one of those storms where you can walk outside after and smell the scents of summer again, you can feel how the world around you has had a nice cool-down. But that’s when a strange sound pierces the otherwise calm evening.

[SFX SCREAMING PEOPLE IN THE DISTANCE]
JEFF: Over at Parson White’s house, his servant is in his quarters outside when his eyes pop open to an awful sound. He hears women and children shrieking as if being tortured.

RAY: Soon, others in town also hear the massacre. But they can also hear French soldiers screaming out specific men in Old Windham. The names Whight, Elderkin, Dyer, and Tete, can be heard above the din. The sound fills the region. Parson White believes this could be judgment day itself. He wastes no time in sounding the alarm. It’s obvious the French and their Indian allies are on a murderous rampage in Old Windham.

JEFF: By dawn, every man in town owns a gun or pitchfork have assembled to march to the bloody scene and fight back against the invaders. Though the sounds of screams have grown more faint by sunrise, the mob can still follow the sound toward Mullin Hill in the east part of town.

[SFX MARCHING]
JEFF: Just as the men from town crest Mullin Hill, they look below them and see an awful sight. It’s brutal. Thousands lay dead all around them. No one has ever seen anything like this before. The carnage is almost too gruesome to talk about.

RAY: But it’s our duty to report what we see, Jeff.

JEFF: You’re right, Ray. But I can’t bring myself to describe what we’re looking at. You have to do it.

RAY: (DEEP BREATH/FALSE DRAMA) Okay. In front of us there’s a pond. Or rather was a pond. It’s mostly dried up because of the drought. But yesterday’s rainstorm has formed a puddle in the middle. Just enough water to get your feet wet, really. But that puddle is enough to fight and die for. (ANOTHER DEEP BREATH) Last night thousands of frogs descended on what’s left of the pond trying to get to the water. There just wasn’t enough water for all of the frogs, and soon a fight between two frogs turned into a fight between hundreds of them, and by morning, thousands of frogs now lay dead. Only a few survivors remain near the puddle in the middle.

[SFX FROGS CROAKING]
JEFF: The men from town are standing here scratching their heads as they stare at all of the dead frogs. Frogs desperate for some water. They now understands the sounds they heard last night were the angry croaks of thousands of amphibians. From this day forward, the pond has been called Frog Pond.

RAY: Locals write down the story in their journals and diaries. Newspapers around the state report the event as a great big joke, and in 1891, a local newspaper man named N.W. Leavitt writes some words, and his son Burton Leavitt composes music for a comic opera titled “The Frogs of Windham.” The legend continues to grow over time. It’s one of those incidents a town doesn’t forget.

JEFF: From here we leap ahead…

RAY: (INTERRUPTING) Ahhh I see what you did there.

JEFF: Sorry, I couldn’t resist. Okay, we jump ahead to the fall of 1924. The story hasn’t gone away in Windham. And now the Anne Wood Elderkin Chapter of the Daughters of the American Revolution see fit to place a plaque at Frog Pond to commemorate the event.

RAY: Once a story makes it to a plaque, there’s something official about the whole thing. Something solid. It’s tough to argue with a plaque.

JEFF: So between the operetta, newspaper articles, and plaque, this is now an event no one will let the town forget. From here we’re going to leap ahead…

JEFF: (CLEARING THROAT) We’re going to leap frog ahead to 1991 to Willimantic, the next town west of Windham. Willimantic has approved funding for a new bridge that will connect Route 32 across the train tracks and Willimantic River to Route 66 on South Street. Department of Transportation engineers proposed a design, but folks in town were NOT impressed. They want some style. Something interesting. So the state caves and hires an architect—that’s something not typically done for a bridge like this.

RAY: Willimantic used to be home to several cotton mills along the river that produced a lot of high-quality thread. The town was known as the thread capital of New England. So these pedestals we see along each side of the bridge are actually supposed to represent spools of thread.

JEFF: Ohhhh That makes sense. And then to combine another local legend, they added 11-foot frogs on the spools at the very end.

RAY: Right. The entire bridge cost $13 million dollars, and opens in September of 2000. And that brings us back to today.

[SFX TRANSITION]
RAY: We do need to point out that in our research, we found a journal entry of a local man named Mr. Follet who operated a mill using Frog Pond’s run-off. He claimed the pond wasn’t dried up at all that night. He recalls the water being no lower than normal, and that no one knew what killed all of those frogs.

JEFF: But everyone does agree that the noise caused quite a stir in town. That in their panic locals heard specific names within the cacophony of sounds, and in the morning thousands of frogs lay dead.

RAY: It almost sounds Biblical, doesn’t it? Like one of the great plagues. The end of the world?

JEFF: And now we’re here at the end of the South Street Bridge looking at 11-foot frogs sitting on spools of thread.

JEFF: Totally worth it to create a bridge that gets us talking about centuries of history and legend. And considering both our family heritage, Ray. This bridge makes me glad that sometimes… a frog is just a frog.

JEFF: I feel like right here it would have been awesome to cue the beginning of the song “Rainbow Connection” sung by Kermit the Frog.

RAY: (LAUGHING) Speaking of music, we found all of the sheet music to “The Frogs of Windham” comic opera on the Library of Congress Web site. Maybe if this episode catches on we’ll have to gather some musicians for a command performance.

JEFF: I’d pay to see that. I mean I wouldn’t pay much, but something.

RAY: If you want to see all of our past episodes, video clips from the New England Legends television series on Amazon Prime, dates for Jeff’s on-going story tour, and find links to our super-secret Facebook page, leap over to ournewenglandlegends.com.

RAY: And of course our theme music is by John Judd.

JEFF: Until next time remember… the bizarre is closer than you think.