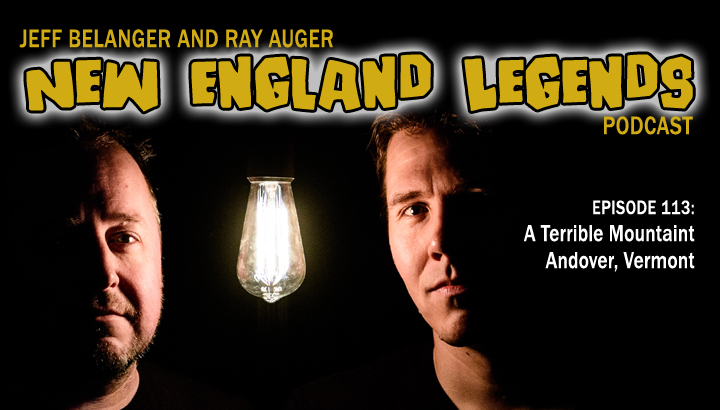 In Episode 113, Jeff Belanger and Ray Auger hike the foreboding Terrible Mountain in Andover, Vermont, in search of tragic accidents and the ghost of a legendary 104-pound old man of a hiker who, in the 1970s, was said to be touch as rawhide until one day he vanished without a trace. Be warned: this episode is terrible!

Part of the 1960 plane crash wreckage on Terrible Mountain.

RAY: I notice you haven’t said much on our drive into Vermont, Jeff. Everything okay?

JEFF: I haven’t said much because sometimes our destination isn’t always cheerful.

RAY: I get that. Sometimes tragedies leave a stain on a community that can be hard to look at. (PAUSE) So why is our destination so bad?

RAY: Come onnnn it can’t be that bad.

JEFF: Hey I’m Jeff Belanger and welcome to episode 113 of the New England Legends podcast. If you give us about ten minutes, we’ll give you something strange to talk about today.

RAY: And I’m Ray Auger. Thanks for joining us as we investigate every legend in New England one week and one story at a time. And a special thanks to our patreon patrons. This is a grass-roots show, folks. No big sponsors, no corporate backing, just a couple of guys with a crazy dream. Our patrons help us with our hosting costs, production costs, promotion, and everything else we need to do to bring you a new story each and every week. If you want to be a bigger part of the movement, head over to patreon.com/newenglandlegends, and for just three bucks per month you’ll get early access to new episodes plus bonus episodes that no one else gets to hear.

JEFF: We also have a big announcement this week. If you don’t already know, there’s also a New England Legends television series that’s available on select PBS stations and right now on Amazon Prime video. And this week we have a brand new episode: It’s Episode 7: Legendary Road Trip: Exploring Wicked-Strange Ghosts, Graves, and Roadside Oddities. I take a trip along New England’s highways and back roads in search of the devil, cursed headstones, Betty and Barney Hill’s UFO encounter site, and I check out a lake monster that’s turned pop-culture. You can go watch this episode as well as the first six episodes right this minute on Amazon Prime video.

JEFF: No. Not a terrible mountain. This place is literally called Terrible Mountain. Here, take a look.

RAY: Wow. Okay, it says Terrible Mountain is 2,694 feet high, it’s the 214th highest summit in Vermont, and sits in Windsor County right next to Okemo State Forest in the central part of the Green Mountain State.

JEFF: Sometimes a location name is impossible for us to resist, isn’t it? I mean, there’s power in the name of a place.

RAY: Yeah, I remember when we explored Haunted Lake in Francestown, New Hampshire, back in episode 54. Some of these places just beg for our attention.

[SFX DRIVING, STOPPING, GETTING OUT OF THE CAR]

JEFF: This is as good a place as any to park the car and check out this place.

RAY: Wow, this mountain is formidable. It’s steep. It’s rocky. This will be a tricky hike.

JEFF: It turns out Terrible Mountain is aptly named not just for its looks. It’s also been the site of tragedies, and the legend of one of the state’s most famous hikers who may still be darting his way up the rocky face of this mountain.
RAY: Well let’s travel back in time to October of 1761 and figure out what happened here.

RAY: It’s October 13, 1761. Andover, Vermont, has just been granted its charter. The town is over 50 square miles in size, and it turns out whoever surveyed the town’s borders… wasn’t thinking.

JEFF: No, definitely not. Town lines are drawn for all kinds of reasons. Sometimes natural features like rivers, streams, or mountains are used to define one part of the town line. Other times it’s arbitrary. Especially back in the earliest days of our country. So the guys who surveyed the town lines for Andover failed to notice that there’s a mountain nearly 2,700 feet high smack dab in the middle of it.

RAY: And while having a mountain in your town isn’t such a bad thing, it can pose a problem when people actually start to live in your town.

RAY: It’s not just a big problem. It’s a terrible problem. You can’t go over this mountain easily, and getting around it is time consuming and arduous. But one problem locals face that’s not big at all, is what to name Andover’s most prominent natural feature. The name Terrible Mountain sticks fast.

JEFF: The solution to Andover’s Terrible problem presents itself in 1799 when about half of the town’s land is parceled into a new town called Weston located on the west side of the mountain. So now it’s now longer a town divided.

JEFF: But keep your eyes wide open. This is definitely bear country.

RAY: What was that?!

RAY: Our next stop is March 19, 1968. The day of the single-worst worst tragedy on Terrible Mountain.

JEFF: The weather is bad. And this twin-engine Beechcraft plane is struggling with the wind and snow. On board are seven men, five of them work for the Jones and Lamson Company in Springfield.

RAY: The wind is more than the small aircraft can take. The plane is pushed around like a kit, and suddenly, the pilots see a terrible sight right in front of them.

RAY: The plane collides with the southwest face of Terrible Mountain killing all seven men instantly.

JEFF: Locals hike up through five feet of snow to where the plane left a black mark on the mountain, but they find no sign of any survivors. Most of the wreckage will remain where it is until one day when it rusts into nothing.

RAY: From here we’ll climb up to the 1970s. There’s a Vermont man who is a legend in his own right. He made his living as a Weathersfield, Vermont, farmer, but his passion is hiking the woods and mountains of New England. His name is Augustus Aldrich.

JEFF: Aldrich is described as a tiny 84-year-old man. He travels light and fast. Thomas H. Borden of Tiverton, Rhode Island, is hiking Terrible Mountain with Aldrich so he can write about the experience for Vermont Life magazine. Borden describes his famous guide.

BORDEN: If an elfin wisp of an old man passes you on a Vermont trail, then turns back and with a twinkle in his blue eyes, asks you to hike a way with him, take care. You’ve probably just encountered Augustus W. Aldrich.

JEFF: Borden was warned that the old man can be difficult to keep up with.

BORDEN: This is one of those blatant Vermont understatements of fact. Aldrich is a cross between the King of Leprachauns and Peter Pan. This 104-pound bundle of rawhide and granite will walk your legs off to your beltline before breakfast.

RAY: It takes Borden and Aldrich several hours to hike to the top of Terrible Mountain. Borden is stunned that Aldrich carries nothing with him. Not even water.

ALDRICH: I used to carry water, but as I grew older it grew heavier. Now I’ve trained myself to where I don’t drink at all on the trail.

RAY: When the pair reach the top of Terrible Mountain, Borden is shocked by what he sees next. Aldrich darts up a 40-foot spruce tree.

BORDEN: He didn’t climb this tree, really. He sort of fell up it. He finally stopped amidst the tender green shoots at the top of the tree and swayed happily at the very peak.

ALDRICH: There’s no one who can beat me at climbing trees!

RAY: I wonder if the legendary Pamola of Mt. Katahdin found Aldrich?

JEFF: We’ll never know. We do know that a plaque is laid out for him near his home on Mt. Ascutney, and we know that the ghost of Old Gus has been reported all over Vermont’s trails and mountains, including here on Terrible Mountain. And that brings us back to today.

Today, there are still problems in the region. Route 100, the very road we traveled to get here, has become a treacherous stretch of road around the Terrible Mountain area.

RAY: I’m looking through some local newspapers, and you’re right. The road is home to countless accidents. Here’s an article from August 2, 2018 from the Rutland Herald that describes how a tractor trailer lost its brakes, flipped on its side, and launched thousands of pounds of heavy pallets at a nearby house, pretty much destroying the house. Two people were sent to the hospital, thankfully no one died.

JEFF: Over the past ten years there have been other tractor trailer accidents here as well, including a logging truck that tumbled into the same house!

RAY: That is truly terrible.

JEFF: We have many layers of legends here at Terrible Mountain. We’ve got this legendary hiker, Augustus Aldrich who left his footprints on Terrible Mountain, and on the hearts and psyche of the Green Mountain State. We’re walking the very trails he walked as we search for what’s left of the Beechcraft plane wreckage.

RAY: You also have an unusually high number of accidents around the mountain.

JEFF: Right, but more than anything it’s the name. Terrible Mountain. You can’t help but expect bad things to happen. Even if you know nothing of the backstory, you figure someone named this place Terrible Mountain for a reason, and now…

RAY: Yeah… speaking of that, I think it’s time we got off of Terrible Mountain.

JEFF: Yeah, even when you understand how legends work, even when your logical brain tells you there’s nothing to fear, sometimes something primal takes over and you figure it’s better to not tempt fate.

RAY: Hey, if you enjoy our stories each week, please share them with a friend. Post our episodes on your social media, and please consider posting a review for us on Apple Podcasts. That goes a long way in helping others find.

JEFF: More and more of our story leads are coming from you, our listeners. We love it when you get involved in our super secret Facebook group, or when you call or text our Legend Line anytime at 617-444-9683. That’s what Liz did, and she left this week’s show closing on there for us.

RAY: We’d like to thank Michael Legge and Dustin Pari for lending their voice acting talents this week. And our theme music is by John Judd!

VOICEMAIL113: Hi, this is Liz Rotondo from Albany, New York. Until next time remember the bizarre is closer than you think.