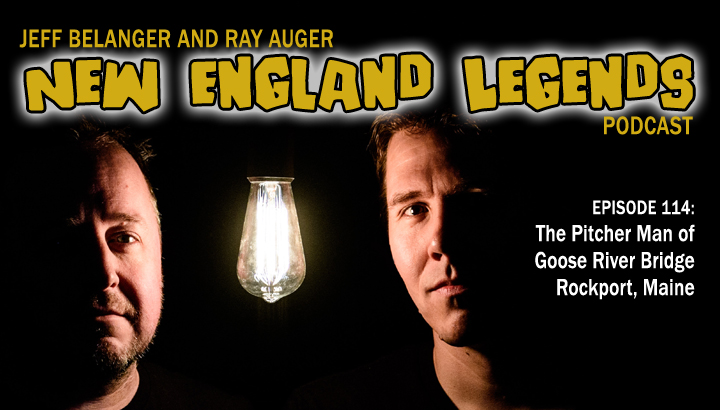 In Episode 114, Jeff Belanger and Ray Auger travel to Rockport, Maine, to explore the haunting of the Goose River Bridge. The ghost of William Richardson is said to offer passers by a sip of ale from his pitchers. If you believe the stories, he’s been out there celebrating for over 200 years. 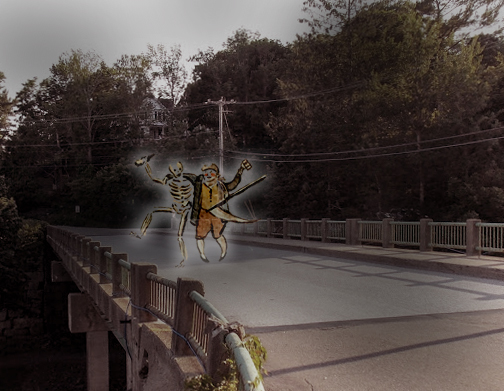 JEFF: Okay, just up here we’ll take a left on to Pascal Avenue.

JEFF: And there it is. This is the Goose River Bridge!

RAY: Okay. Well, it’s pretty enough here by the water in Rockport, Maine. What are we looking for?

RAY: That makes sense. It’s October–it’s a good time for ghosts. Anything special about this ghost that I should know before we start?

JEFF: Ray, this may turn out to be our single-favorite ghost in all of New England.

JEFF: Because we’re searching for the Pitcher Man of Goose River Bridge. And they say if you see him, he may just offer you a beer.

RAY: And I’m Ray Auger, and welcome to episode 114 of the New England Legends Podcast. If you give us about ten minutes, we’ll give you something strange to talk about today.

JEFF: For 114 weeks in a row, we’ve been on a mission to chronicle every legend in New England one story at a time.

RAY: We’re doing that through this podcast. Through our Web site, which is ournewenglandlegends.com, through our super-secret Facebook group, and through the New England Legends television series on PBS and Amazon Prime.

JEFF: And there’s a brand-new episode of the now 7-part TV series that you can watch right this minute on Amazon Prime Video. It’s called Legendary Road Trip: Exploring Wicked-Strange Ghosts, Graves, and Roadside Oddities. So please check it out. (PAUSE) We’d also like to thank our patreon patrons who are sponsoring this episode. This show takes a lot of time, effort, and expenses. The more we have to work with, the more we can give right back to you. If you’d like to vote with your wallet and help us out, go to patreon.com/newenglandlegends, and for as little as $3 bucks per month you’ll get early access to new episodes plus bonus episodes that no one else gets to hear.

RAY: Also, if you enjoy our show, please post a review for us, and tell a friend or two. We’re building a huge community of legend-seekers, and we appreciate you being part of it.

JEFF: Okay, Ray, we can’t exactly pull the car over on Goose River Bridge, we’ll have to find a place to park.

RAY: Hey, look right over there. Turn here on High Street and we can park right on the corner in Cramer Park.

RAY: Okay, Jeff, I’ve never been so focused on finding a ghost since we started doing this show. You said he’ll have a beer for us?

RAY: Not just a beer. A whole pitcher?

JEFF: Yes. We’re looking for a ghost that locals call The Pitcher Man.

RAY: I love it. (PAUSE) From here in Cramer Park, we can easily see Goose River Bridge maybe 100 feet to our right. On the far side of the bridge, is Rockport Harbor – the water comes right up to the bridge, and Goose River right beside us is more like a stream running into the harbor.

JEFF: The beer-drinking ghost we’re looking for is William Richardson. And to figure out why he’s haunting this bridge, we’re going to head back to 1779, back when the town of Rockport was called Goose River.

JEFF: This is the time of the American Revolution. The colonies are fighting for British independence.

RAY: Not everyone, though. There are plenty of Tories around. These folks live in the colonies, but are still loyal to the British Crown. They don’t want independence. It’s a seriously troubled time. Neighbors don’t trust each other depending on their political views.

JEFF: I can tell you there’s one guy in town who’s no fan of British rule, and his name is William Richardson. And it turns out he’s got good reason. British ships and soldiers are constantly landing in the nearby harbor and taking whatever supplies they may need from the townspeople. And sometimes, they’ve even been known to torch crops or buildings they don’t need in an effort to hurt the rebellion.

RAY: When British ships pull into port, some of the folks in town have been known to hide in the woods with their muskets and try and pick off an officer or two.

RAY: Some of the more musically inclined and clever Goose River locals would grab a drum and start drumming a march.

RAY: While another man called out military attack orders to soldiers who didn’t exist.

RAY: The tactic often worked and spooked the British.

JEFF: William Richardson loves hearing these stories about how his friends and neighbors thwarted the Brits. And then… one day… Richardson has his turn. You see, Richardson pilots a fishing boat in these waters. It’s how he earns his living. One day he spots a privateer’s vessel captained by a man named Samuel Tucker bearing down the cost.

RAY: Captain Tucker had recently… uhhh relieved, shall we say… the British of a giant cargo of tea, and the Brits were not too happy about it.

JEFF: It had already been established back in Boston Harbor on December 16, 1773 during the Boston Tea Party, that the British have no sense of humor when it comes to losing their tea.

RAY: No they don’t. And a British warship is chasing down Captain Tucker.

[SFX CANNON IN THE DISTANCE]

JEFF: William Richardson sees the chase and decides this is his moment to act.

JEFF: Richardson shouts to the privateer. Captain Tucker puts his faith in the stranger who guides his ship through the tricky waters along Maine’s coast. Richardson leads Tucker’s ship just south of Goose River to a harbor called Harpswell where they hide. But there’s a problem. The British ship catches up and blocks the mouth of the harbor to wait for reinforcements.

RAY: When it rains, it pours. A storm moves in, making the waters even more dangerous. Captain Tucker thinks this is the end, but Richardson sees an opportunity.

RICHARDSON: They’d be crazy to follow us in the storm, Tucker!

RAY: Richardson shouts to the other boat. And with that, he leads Captain Tucker through the choppy waters, through the storm, along a dangerous coast, sneaking right past the British ship, and out into open waters where Captain Tucker sails on to Boston.

RAY: By the time the British realize Captain Tucker is gone, it’s too late. They never see their tea again.

JEFF: Back in the town of Goose River, William Richardson quickly becomes a local hero as word of his deed spreads. At least those on the side of the revolution think he’s a hero. The Tories, they loathe the man. They view him as a traitor.

RAY: From here we jump ahead just two years. It’s October 19, 1781, and British General Charles Cornwallis and 8,000 of his troops are down in Yorktown, Virginia, completely surrounded by American General George Washington and French General Jean-Baptiste Rochambeau along with 17,000 of their men. Cornwallis has no choice but to surrender to Washington, in effect, ending the American Revolution.

JEFF: Word travels fast up the coast that the war is pretty much over. America just won its independence. Word travels all the way up to Goose River, Maine, where celebrations break out all over town. And not one to miss a party at the expense of a British surrender, William Richardson hits the tavern for some ale.

RAY: Spirits are high. There’s so much hope for this new nation. And William Richardson is getting loaded. Though the tavern is packed, he figures, there aren’t nearly enough people out celebrating. So he takes to the streets of Goose River.

RICHARDSON: (DRUNK) We won! Damn the British, we won! Come drink with me!

JEFF: Richardson is carrying two pitchers of beer, and stumbling from house to house yelling for those inside to come out and join him. Then he stumbles his way toward the wooden bridge that crosses Goose River. There’s more houses on the other side, and he’s determined to rouse those inside.

JEFF: In his drunken haze, Richardson sees three men on horseback approaching from the other side of the bridge.

RICHARDSON: Have you heard? We won! Here… have a drink with me!

JEFF: What Richardson doesn’t know, is that these men are Tories. And they’re furious. Without a word, the lead rider lifts his musket.

JEFF: And smashes Richardson in the face, crushing his skull.

JEFF: Richardson drops on the bridge dead, and the men ride off.

RAY: No one was ever caught for the murder. And the folks in Goose River are devastated by the loss of old Bill Richardson. Though he was gone in body, he seemed to be very much around in spirit. This bridge has been haunted by him ever since. And that brings us back to today.

JEFF: Ray, remember where we parked our car next to the bridge?

RAY: Sure, in Cramer Park.

RAY: Ahhh, I can see that, it’s small, surrounded by trees.

JEFF: They affectionately refer to the place as the Passion Pit.

JEFF: It’s also the home of ghost sightings. Teenagers will be in their dark cars completely… uhhmmm distracted… when some report a man will approach the vehicle. When they open the window to get a better look, a ghostly figure holds out a pitcher of beer.

RICHRDSON: Care for a drink?

RAY: And that sends the teens racing out of the Passion Pit directly toward purer pursuits.

JEFF: That it does.

RAY: So the ghost of Bill Richardson carrying pitchers of beer has been seen not only on the bridge, but also around it.

RAY: And those who don’t know the story, refer to him as the Pitcher Man of Goose River.

RAY: Okay, I love this ghost.

JEFF: What’s not to love? Patriotism. Beer. A gregarious drunk who likes to share.

RAY: Right, all that. But with ghostly legends we always start at the end, right?

JEFF: Of course. That’s how it works.

RAY: And the end of this story is a partying drunken ghost offering up the suds to those lucky enough to pass by.

RAY: But if you actually ask yourself why he’s here still celebrating, you get a story that connects you to the earliest days of our country.

[SFX TWO BEER CANS OPENING, ONE THEN THE OTHER]

RICHRDSON: Care for a drink?

JEFF: I’ll drink to that.

RAY: I’ll drink to that as well.

JEFF: If you enjoy listening to us over a beer, tea, or whatever your favorite drink may be, please help spread the word. And if you don’t already subscribe, you should because it’s free! Find us on iTunes, Google Podcasts, Stitcher, Spotify, iHeartRadio, or wherever you get your podcasts.

RAY: Also, be sure to check out the limited edition 2020 Haunted New England wall calendar featuring stories by Jeff Belanger, and the eerie photography of Frank Grace. You can find a link to buy it on our Web site at ournewenglandlegends.com

JEFF: We’d like to thank Jim Harold from the Paranormal Podcast for lending his voice acting talents this week, and our theme music is by John Judd. And did you know you can call our legend line anytime at 617-444-9683 and leave our show closing on our voicemail? That’s what Jody did.

VOICEMAIL: Hi, it’s Jody Maruca from Norwood. Until next time remember the bizarre is closer than you think.