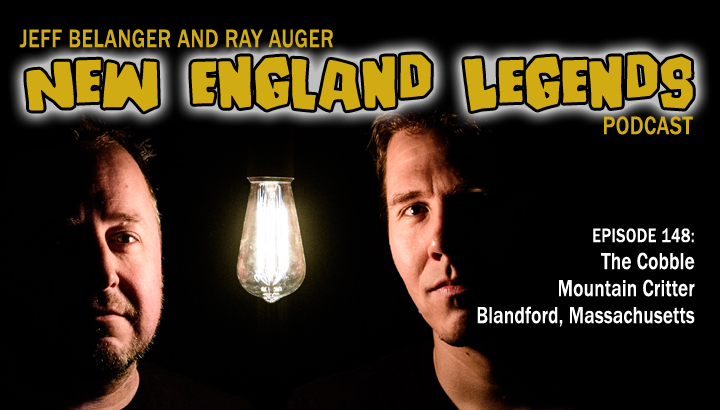 In Episode 148, Jeff Belanger and Ray Auger hike the woods surrounding the Cobble Mountain Reservoir in Blandford, Massachusetts, in search of a Bigfoot-type creature locally known as the Cobble Mountain Critter. Could this be the same Sasquatch that’s been seen in the nearby Berkshires, or is it something weirder? 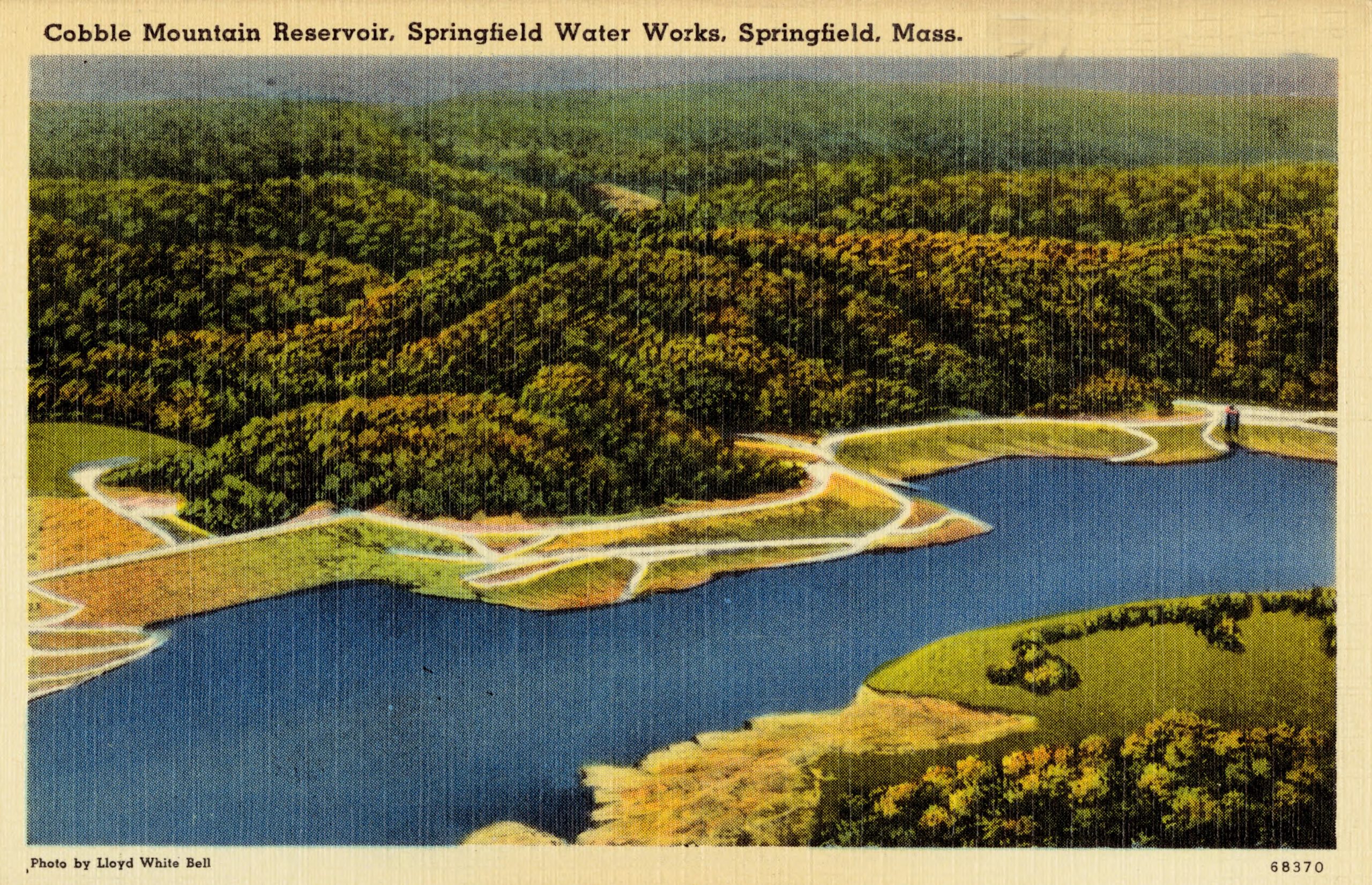 JEFF: That looks like the Cobble Mountain Reservoir just ahead, Ray.

RAY: It’s a pretty spot, I can see why people would come here to Blandford, Massachusetts, right near the Berkshires.

JEFF: It turns out it’s not just people who are coming to the reservoir.

RAY: Hmmm, what else is coming here, an animal, I assume?

JEFF: Sort of. It’s an animal unlike just about anything else in Western Massachusetts. Today we’re on the hunt for the Cobble Mountain Critter.

JEFF: Hey, I’m Jeff Belanger, and welcome to Episode 148 of the New England Legends podcast. If you give us about ten minutes, we’ll give you something strange to talk about today.

RAY: And I’m Ray Auger, thanks for being part of our community of legend seekers. We’re on a mission to chronicle every legend in New England one story and a time, and we can’t do that without the support of our Patreon Patrons. These folks throw us just $3 bucks per month and get early access to new episodes, plus bonus episodes and content that no one else gets to hear. If you want to become a bigger part of the movement, head over to patreon.com/newenglandlegends to sign up.

JEFF: Did you know that many of our story leads come from you, our army of legendary listeners?

RAY: I knew that!

JEFF: I know you knew that. I’m just reminding everyone else to reach out to us on social media, our Super Secret Facebook group, our legend line, which is 617-444-9683, or email us through our Web site where you can also find dates for my ongoing, and now virtual live story tour. Thank you to Gale LaScala! Gale, thanks for the tip and the notes on this week’s legend.

RAY: So we’re looking for the Cobble Mountain Critter?

JEFF: That we are.

RAY: I already love the name. It sounds all little, cute, and fuzzy.

JEFF: By the eyewitness accounts, it’s fuzzy, and I guess “cute” is in the eye of the beholder, but it’s not little. The creature takes its name from this body of water called the Cobble Mountain Reservoir, which straddles the town lines between Blandford and Granville, Massachusetts.

RAY: And this body of water is kind of legendary in its own right. First, it’s an engineering marvel that provides drinking water for about 30 percent of Massachusetts. At the time it was built in 1931, it was the largest earthen dam in the world. The water comes from several nearby mountain streams and brooks surrounded by about 31,000 acres of undeveloped land where public access is strictly forbidden.

JEFF: Hmmmm forbidden, you say? No people, means someone… or something could go unnoticed.

JEFF: Exactly. To figure this out, we’ll have to go back in time. Ray, grab your parachute pants and neon colored t-shirt. We’re heading back to the mid 1980s!

RAY: This is totally awesome, Jeff.

JEFF: It is. The 80s are just that, and your mullet looks fantastic! Our story begins August 21, 1983, about 18 miles northwest of Blandford on October Mountain in the Berkshires of Western Massachusetts, when four friends are cooking some steak and chicken over an open fire near the remains of Camp Eagle.

JEFF: That’s the place. So picture this. It’s about 10:00 o’clock at night when the campers hear a strange rustling sound in the nearby woods.

RAY: These four campers are seasoned enough to know that a campfire and humans around are enough to scare off most animals. But this rustling sound persists, and it sounds like something big.

RAY: An animal might wander by, even something as big as a bear could be sniffing around.

[RUSTLING
]
JEFF: But the rustling sound continues for almost two hours! No animal does that. The animals either attack or move along. So two of the guys move closer to investigate. They walk almost 100 yards before they see a creature… a monster… it’s standing on two legs in the middle of the path ahead of them. It’s over seven feet tall. The two men run back to their camp and get little sleep that night.

RAY: The story makes it into the local papers in the coming days, and now there’s talk of a Bigfoot in the Berkshire. A few years later, another Bigfoot sighting on October Mountain makes the news – it’s just enough to keep the story alive.

JEFF: Bigfoot or Sasquatch has been in an out of the news and popular culture for decades now. And it looks like Massachusetts is having a moment with the beast. From here, we jump ahead a few years to the year 2000.

JEFF: It’s now September of 2000 here at the Cobble Mountain Reservoir in Blandford.

JEFF: It’s late at night, about 1:00 AM, when a local fisherman pulls in to sneak on to the reservoir for some night fishing.

WITNESS: The water was very low this day. I was fishing and there was about 4 Beaver-Tail slaps on the water so I knew there wouldn’t be any smallies hanging around. I took a few more casts and caught a Dace. I was trying to get the fish off my hooks when I heard something heavy about 45 yards away from me cracking sticks as it approached from the road onto the freshly cut brush.

It sounded like a human walking, and I thought I was in trouble with the law. My flashlight was dying and I was having trouble seeing just getting the fish off my two treble hooks.

I asked, “Who’s There?!?!” and I just heard a stick snap really loud as it stood still. I hit my flashlight in order to make it brighter and I saw big eyes shine, and a dark silhouette of what looked to be shoulders. I started yelling at it to get out of here and at this point, I’m thinking deer… or worse, maybe a bear standing up. I heard a few more big snaps as it walked onto the paved road and that’s when it cried out in this terrible noise that I’ve never heard before. It echoed thru the mountains and it scared the bajesus out of me.

It wasn’t a bear, or a deer, that’s for sure. It was huge, and the sound it made sounded like a shrieking demon baby. That’s the only way I could describe it. A loud shrieking howl. It wasn’t a roar or a deep growl. It was more high-pitched.

I ran as fast as I could to my car which was the scariest run, walk, stop and listen journey to my car I’ve ever encountered in my life. I was waiting for a werewolf to jump out and get me or something. It was true terror that I’ve never experienced to this day.

RAY: The fisherman submits his experience to the Bigfoot Research Organization which causes a bit of a local sensation. But people who live around the reservoir, they know the story. It’s been passed around for a few decades now.

JEFF: One description of the creature is that it’s bigger than a bear or a man, hairy, walks upright, and his eyes glow red, which led to the nickname Red-Eye Dick.

RAY: (SNICKERING) In another version he has white glowing eyes, like two small flashlights. They say the beast grunts and growls like no animal they’ve ever heard before.

JEFF: My favorite version of the origin backstory of the Cobble Mountain Critter dates him all the way back to the time just after the Civil War.

JEFF: They say this lone Civil War veteran was camping near here when he approached a stream to wash his dishes. That’s when a bear appears out of nowhere.

JEFF: The bear attacks! The two men are wrestling. And that’s when…

JEFF: Lightning strikes them both… fusing them together into some bizarre new creature cursed to walk the region for eternity.

RAY: Okay, that’s amazing. One last theory thrown out by locals is that this is simply a wild man. We’ve explored wild man stories before.

JEFF: Right, the Winsted Wildman of Connecticut comes to mind.

RAY: That’s an example, and not all that far away, really. Some folks say the Cobble Mountain Critter is an old man who hasn’t had a shave or haircut in many years, and he lives out here surviving like an animal.

JEFF: No matter how he’s described. The Cobble Mountain Critter ain’t cute. And that brings us back to today.

RAY: The more locals we talk to, the more stories we hear about someone who knows someone who saw the creature.
JEFF: There’s the story of the guy driving along Cobble Mountain Road when a man runs out of the woods panicked with torn clothes, and he gives the shaken runner a ride into town for help.

RAY: Or others who report strange howls and sounds echoing through the woods at night. Some hunters even claim to have taken a rifle shot at the beast.

RAY: But no body turns up.

JEFF: And this brings up another point. If you see Sasquatch in the woods and shoot him dead in an effort to make yourself famous. Is it murder?

RAY: Huh I don’t know. If he’s an animal, then I guess you’re just a hunter.

JEFF: But is he an animal, or is he more human than animal?

RAY: If you believe he’s more human than animal, then I guess it’s murder.

JEFF: Which is why in 1984, the state of Washington passed a law saying it’s illegal to kill Sasquatch.

RAY: If he exists.

JEFF: If he exists.

RAY: At some point anything unexplained or weird happening around the reservoir gets blamed on the Cobble Mountain Critter.

JEFF: And here we are looking for a legendary beast who is known the world over by various names, but at least around the Reservoir, he’s known as the Cobble Mountain Critter.

[OUTTRO]
JEFF: If you don’t already subscribe to our podcast you should because it’s free! You can find us on iTunes or Apple Podcasts, Stitcher, Spotify, Google Podcasts, iHeartRadio, TuneIn, or wherever you listen to your podcasts.

RAY: And please, post a review of our show on Apple Podcasts. Those reviews really help lift us up so others find us and can join our growing army of legend hunters. Please also consider telling a friend or two about us. Post your favorite episode on your social media. It helps more than you think.

JEFF: We’d like to than Dustin Pari for lending his voice acting talents this week. And our theme music is by John Judd.

VOICEMAIL: Hi, this is Sandy Nicole from Clinton, Massachusetts, until next time remember the bizarre is closer than you think. 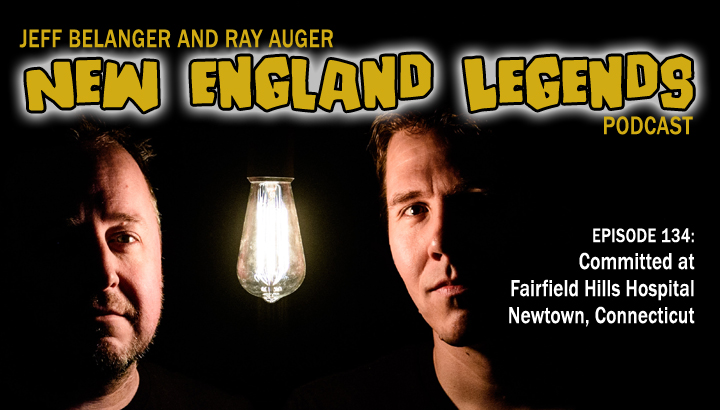 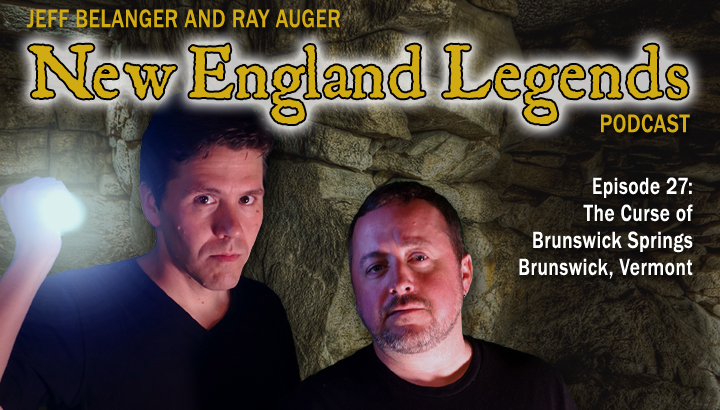