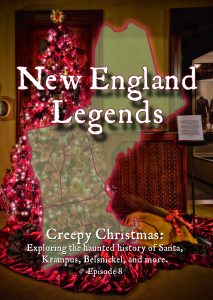 BOSTON, Mass. – December 11, 2019 – When one thinks of Christmas, usually visions of sugarplums and jolly old St. Nick come to mind, but the roots of this festive holiday are dark and creepy, filled with monsters and ghosts. In time for Christmas, the Emmy-nominated New England Legends television series today launched its “Creepy Christmas” episode to Amazon Prime Video. Additionally, the episode will air on Saturday, December 21 at 11:00 PM on WGBY in Springfield, Massachusetts, and on Thursday, December 26 at 7:30 PM on Vermont PBS.

In “Creepy Christmas: Exploring the Haunted History of Santa, Krampus, Belsnickel, and More,” legend hunter Jeff Belanger turns his inquisitive eye toward the backstory of America’s most beloved holiday to discover traditions, legends, and lore that are filled with frights and chills. In the episode, Belanger travels to the Yankee Candle headquarters in South Deerfield, Massachusetts, to interview Santa Claus about his entire life, from his boyhood in Myra, Turkey, in the fourth century, to his sainthood, and how he went on to become one of the most famous figures on earth.

Belanger also explores some of Saint Nicholas’s dark cohorts, like Der Belsnickel and Krampus. The Smith-Harris House in Niantic, Connecticut, celebrates the Yuletide season with a visit from the Belsnickel each December. Thankfully this Belsnickel doesn’t beat the naughty children of Niantic with a stick like he did traditionally back in Germany. In Providence, Rhode Island, Belanger attends the Krampus Society of New England’s annual Krampus Ball, filled with Krampus figures from the region celebrating a monster who was known to snatch up naughty children and eat them at Christmastime.

“Christmas has always been one of my favorite holidays,” said host, writer, and producer Jeff Belanger. “As I get older, I can’t help but feel more Scroogey every year. But once I traced the roots of this holiday back through New England and back through the world, the holiday means so much more to me now. We’ve white-washed Christmas, but these ghosts and monsters may just be poised for a comeback, and they may just redeem us all.”

“I recall that old Christmas song about ‘scary ghost stories and tales of the glories of Christmases long, long ago,” added director and executive producer Tony Dunne. “I never thought about Christmas as a time for ghost stories, but it turns out that a ghost story brought to Boston in 1867 helped define this holiday not only for New England, but for the world.”

Belanger and Dunne are currently working on future episodes of New England Legends. The entire series is available on-demand on Amazon Prime Video. The New England Legends series has been nominated twice for an Emmy under the “Magazine Program/Special” category. Since August of 2017, Belanger and his co-host Ray Auger have been producing the weekly New England Legends podcast, which has been downloaded over one million times. The podcast is available for free on iTunes, Stitcher, Google Podcasts, Spotify, and all of the other podcast streaming services.

“Creepy Christmas” premieres Saturday, December 21 at 11:00 PM on WGBY in Springfield, Massachusetts, and on Thursday, December 26 at 7:30 PM on Vermont PBS.