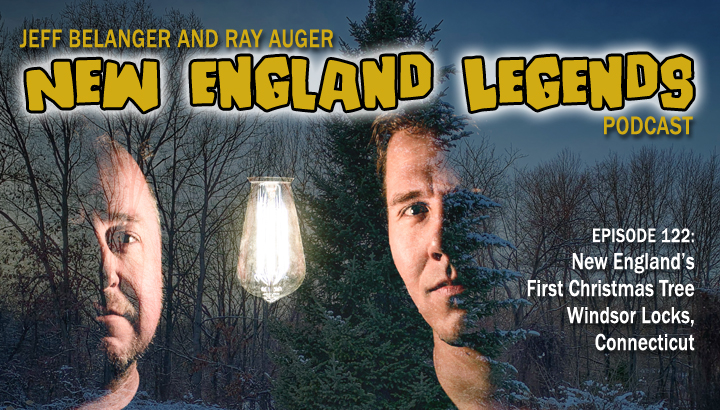 In Episode 122, Jeff Belanger and Ray Auger celebrate the Christmas holiday in Windsor Locks, Connecticut, at the site of New England’s first decorated Christmas tree. In 1777, Hessian Prisoner of War, Hendrick Roddemore, is said to have chopped down an evergreen to decorate in his cabin, putting up a Christmas tree almost a century before it was cool to do so in these parts. Wishing everyone a legendary holiday season! 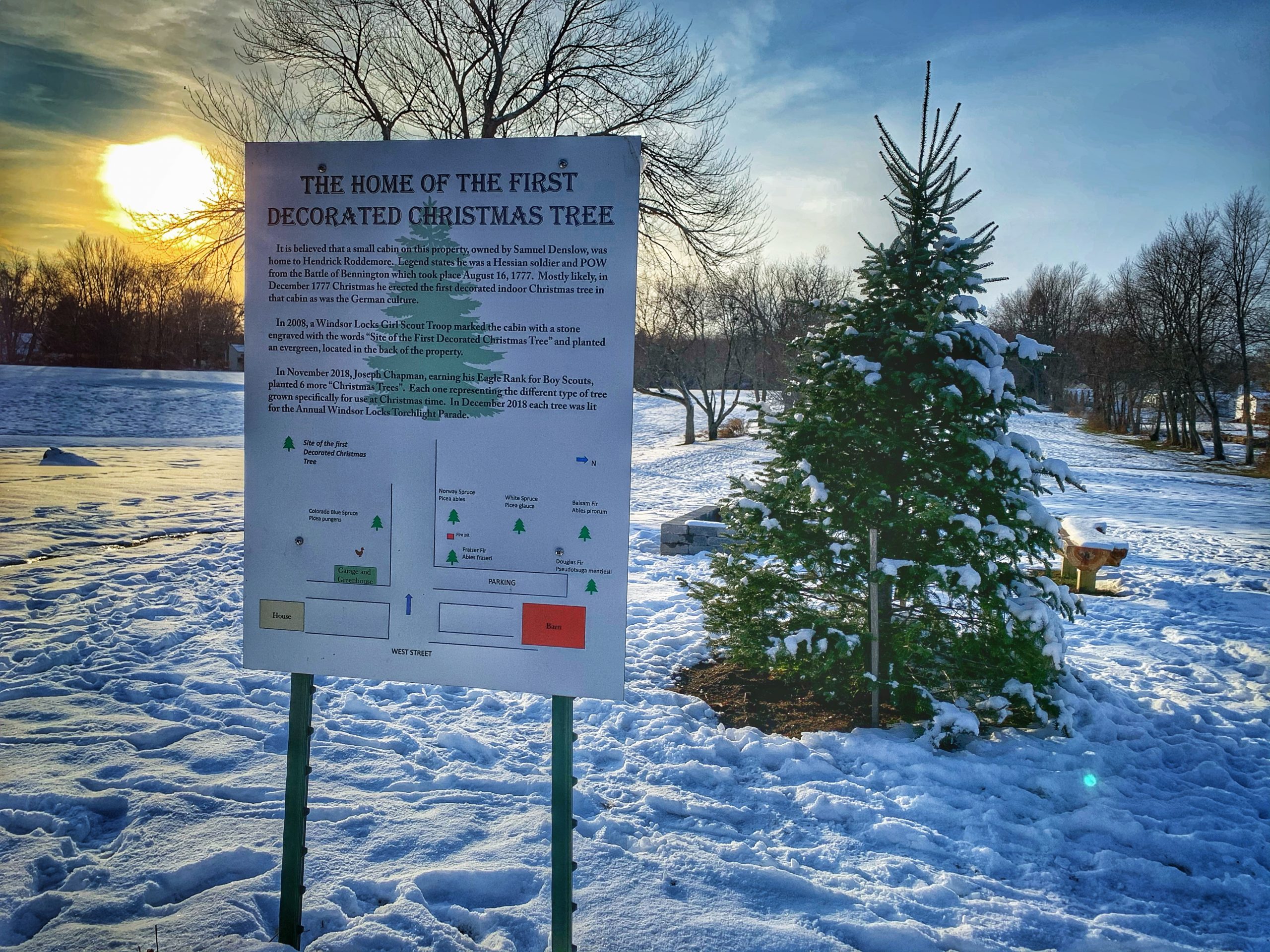 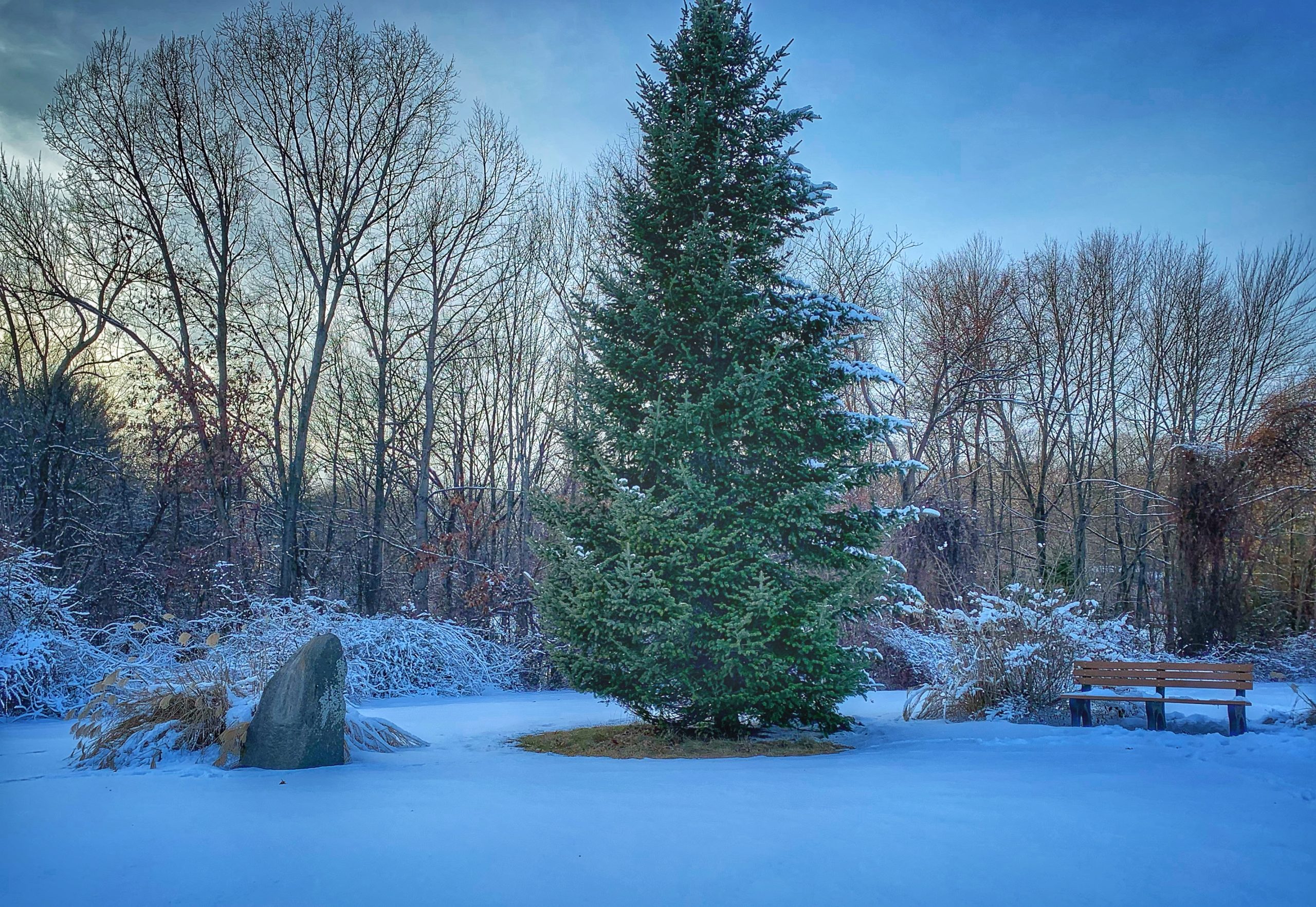 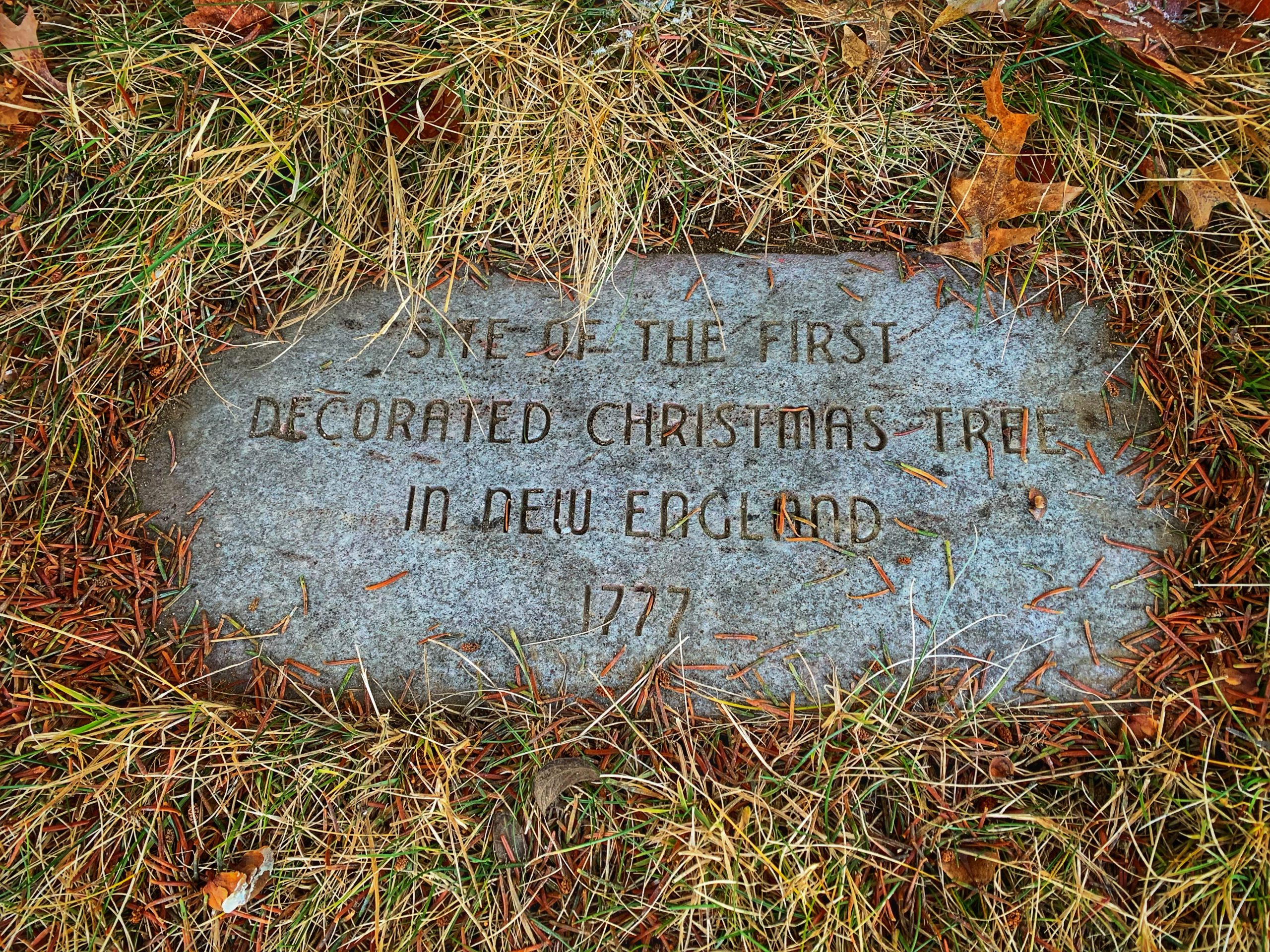 RAY: And Merry Christmas to you, Jeff.

JEFF: Your Christmas tree is looking pretty sweet. You got some New England Legends bracelets on some of the branches, looks a like a bag of Cheetos leftover from this past summer’s redneck party, I see a couple of cans of beer in there. Nice!

RAY: Yup, the Auger family Christmas tree has something for everyone.

JEFF: Did you ever wonder why you put up a Christmas tree, Ray?

RAY: Huh, I guess I haven’t given it too much thought. My parents did it when I was a kid. Most of the families I know put one up. Wait… lemme guess… there’s a legend here.

JEFF: There is! One that’s going to take us to Windsor Locks, Connecticut, Ray, to the site of New England’s first Christmas tree.

JEFF: Hi, I’m Jeff Belanger, and no matter what you celebrate, happy holidays and welcome to episode 122 of the New England Legends podcast. If you give us about ten minutes, we’ll give you something strange to talk about today.

RAY: And I’m Ray Auger. Happy holidays to all of our legendary listeners, thanks for joining us on our mission to chronicle every legend in New England.

JEFF: A very heartfelt thank you to all of our patreon patrons who make this podcast happen. These are the people who let us know they believe in the mission by helping out with $3 bucks per month, and that gains them early access to new episodes plus bonus episodes that no one else gets to hear. If you want to help us continue to grow with new stories each week, head over to patreon.com/newenglandlegends to lend your support.

RAY: And if you don’t already subscribe to our podcast do it! Because it’s free, and we want to make sure you don’t miss an episode. You can find us on Apple Podcasts, Google Podcasts, Stitcher, Spotify, iHeartRadio, or wherever you get your podcasts.

JEFF: Right. And if enjoy listening to us each week, your friends might too. Please pass us along.

RAY: And I saw the brand-new Creepy Christmas episode.

JEFF: That’s right! Episode 8: Creepy Christmas, exploring the Haunted History of Santa, Krampus, Belsnickel, and More, is out now. This was such a fun project. We interview St. Nicholas, we go to the Krampus Ball in Providence, Rhode Island, I get beat by the Belsnickel in Niantic, Connecticut, and we head to Boston in search of a ghost who saved Christmas. If you’re a Prime member you can watch it right now for free. If you’re not a Prime member, you can go stream it for just 99 cents.

RAY: Okay, it’s Christmas, and there’s a legend behind the Christmas tree?

JEFF: There is, so I think we should head to Windsor Locks, Connecticut, to learn more.

JEFF: No, no, no Ray… we’re not driving this time.

JEFF: Let’s take this instead.

JEFF: (YELLING OVER THE WIND) We’re heading to the Noden-Reed Museum in Windsor Locks.

JEFF: Yeah, maybe we should have taken the car. Okay, it looks like we’re here at the Museum.

RAY: Oh good, let’s go inside and get warm!

JEFF: Oh, sorry, Ray. We’re actually going behind the house to the park.

RAY: What are we looking for?

JEFF: There’s a stone in the ground near an evergreen in the back corner of the park commemorating America’s first decorated Christmas tree.

RAY: How will we find it with snow on the ground?

JEFF: According to some documents from the historical society, it should be 25 rods north of Spring Street and 90 rods west of West Street.

JEFF: This park isn’t that big. I’m sure we can find. I see a park bench near that large evergreen over there.

RAY: That’s gotta be it.

JEFF: And there’s the stone right at the base of the tree! Go ahead and give it a read.

RAY: It’s a flat stone in the ground and it says: Site of the first decorated Christmas Tree in New England 1777.

JEFF: So let’s head back in time and figure out how this got here.

JEFF: We’re going way past 1777, we’re heading back over two thousand years to the Nordic part of Europe. There’s an annual festival called Yule that takes place on the winter solstice.

JEFF: In the far north, you live in three seasons: spring, summer, and fall. But winter… you try and survive the winter. The people who live here look out at the landscape and see that the icy winter kills everything. It kills the grass, the flowers, the trees. It’s barren and cold. But there’s one tree that winter can’t kill. One tree that can stand up to the wind and cold and icy fury.

RAY: Of course! The evergreen!

JEFF: And that sound.

JEFF: Is it just the wind whipping through the naked trees, or is the cries of ghosts screaming in the dark night?

RAY: To protect themselves from the ghosts and bad spirits, the Nordic people looked to the evergreens, which must have some kind of magic or special properties. They would hang the branches over their doors and windows to keep out bad spirits.

JEFF: They would also make offerings to the evergreens out in the field. They would drape the guts and entrails of slaughtered animals around the tree as an offering.

RAY: Ugh… I’ll have that to think about the next time I’m stringing popcorn around my Christmas tree. Germany is credited with being the first country to incorporate bringing the Christmas tree inside the home back in the 16th century. Protestant reformer Martin Luther was said to have been inspired to add candles to the Christmas tree after walking home one cold, winter night and marveling at the bright twinkling stars shining through the evergreens. He wanted to recreate that look for his children.

JEFF: Okay, so over the decades, the Christmas tree grows from its pagan roots into something Christians all over Europe are incorporating into their homes. But that idea doesn’t initially make it to the New World.

RAY: As we’ve discussed in a previous Christmas special, Boston even banned Christmas back in 1659. No trees, no lights, no making merry, no nothing.

JEFF: So now we jump ahead to August 16, 1777 in the region of Bennington, Vermont. Something big is happening.

RAY: It’s the Battle of Bennington. The American Revolution is in full swing. There are 2,000 rebel men mainly from New Hampshire and Massachusetts being reinforced by the Vermont militiamen facing about 1400 British and Hessian soldiers. The battle is a big victory for the American cause. Hundreds of British and Hessian soldiers are taken captive.

JEFF: And therein lies the problem.

JEFF: Hundreds of prisoners, and no place to put them. No prisons. So the prisoners of war are dispersed throughout New England to any place that can take them. One of these Hessian soldiers is Hendrick Roddemore.

RAY: Roddemore is brought to the village of Pine Meadow, which was part of Windsor, Connecticut. He’s being housed in a small cabin owned by a local farmer named Samuel Denslow. Roddemore will serve his time working on the farm.

JEFF: Now we flash ahead just a few months to December. Roddemore is living in this quiet little cabin. He’s thousands of miles from home, he has no idea where his fellow soldiers ended up, and he’s looking for some kind of comfort. So he does something he did back home in Germany.

JEFF: He cuts down a small evergreen tree. He drags it inside his cabin, and decorates the tree with ribbons, fabric, and anything else he can find.

RAY: Sam Denslow sees the tree, shrugs his shoulders, and figures this must be some strange foreign custom.

JEFF: And he’s correct. The idea seems a little absurd. Trees belong outside. Denslow sees no harm in it, it just looks strange. His family also thinks it’s weird, but so too is Roddemore. And that brings us back to today.

JEFF: Once royalty starts doing something, trends follow. Soon everyday people wanted Christmas trees in their homes too, because if it’s good enough for the Queen, well then, the Smiths and the Joneses should have one too. Until eventually that trend makes it across the pond to America.

RAY: In German communities in places like eastern Pennsylvania, those families have been setting up Christmas trees since the early 1700s. But in New England, it takes longer to catch on. But catch on it does in the latter half of the 1800s.

JEFF: Until eventually someone asks the question, who did it first?

RAY: We always want to know, don’t we? So how can we know for sure this spot in modern-day Windsor Locks is the first? If Hessian soldiers were held captive all over New England, how do we know Hendrick Roddemore was the first to put up a tree and decorate it?

JEFF: The short answer is: we don’t. There’s no original source material saying Roddermore definitely put up a Christmas tree in 1777. The first time it appears in print is a Christmas Day, 1955 Hartford Courant newspaper article who quotes an unnamed old timer as the source. The old timer basically figured that Robbemore lived in that little cabin, he’s Hessian, and around Christmas it’s logical he would have carried on his own traditions.

RAY: (INTERRUPTING) AND he lived in a village called Pine Meadow…

JEFF: Right, so plenty of pine trees around.

RAY: It doesn’t seem far-fetched at all.

JEFF: No, but there’s also nothing concrete.

RAY: I’m looking at a stone right now, Jeff. One that says: Site of the first decorated Christmas Tree in New England 1777.

JEFF: It IS tough to argue with a stone monument. And I guess no other New England town is arguing with Windsor Locks today.

RAY: It comes down to a little faith in a legend, Jeff. If there’s one thing I’ve learned through all of our adventures, it’s that belief makes a thing real. I choose to believe I’m standing at the site of New England’s first Christmas tree.

JEFF: You know what, Ray? That’s good enough for me. Merry Christmas.

RAY: Merry Christmas to you, Jeff.

JEFF: And Merry Christmas to all of you legendary listeners out there. Did you know this is our third Christmas special? Don’t forget to visit our archives for more holiday weirdness.

JEFF: Or episode 70, the ghost who saved Christmas.

RAY: Or episode 17 – when Boston banned Christmas, an episode we mentioned earlier in the story.

JEFF: And be sure to watch the Creepy Christmas episode of the New England Legends television series right no on Amazon Prime.

RAY: If you’d like to give us a gift this holiday season, how about posting a review on Apple podcasts, or telling a friend or two about our show. Like a legend, word-of-mouth is how we grow our army of legend hunters.

JEFF: Feel free to get in touch with us anytime in our super-secret Facebook group, or call or text our Legend Line anytime at 617-444-9683, we love your feedback, and love when you leave our show closing on there for us. And of course, our theme music is by John Judd.

VOICEMAIL: Hey you guys this is Mark Dietz from Erie, Pennsylvania. Just want to say I love your podcast and the bizarre is only a podcast away. Keep up the good work. Thanks.