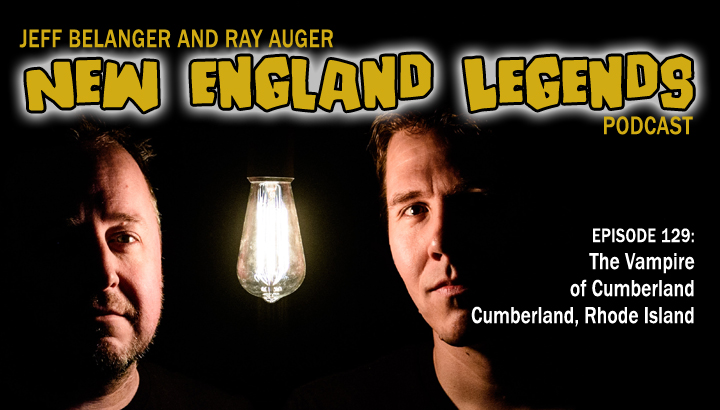 In Episode 129, Jeff Belanger and Ray Auger search for a vampire buried in a tiny family cemetery in Cumberland, Rhode Island. In February of 1796, the father of Abigail Staples petitioned the town to exhume her body and perform some experiments in an effort to save his other daughter, Lavinia who was dying from consumption. Some believed if Abigail was indeed a vampire, perhaps they could break the spell to save Lavinia. 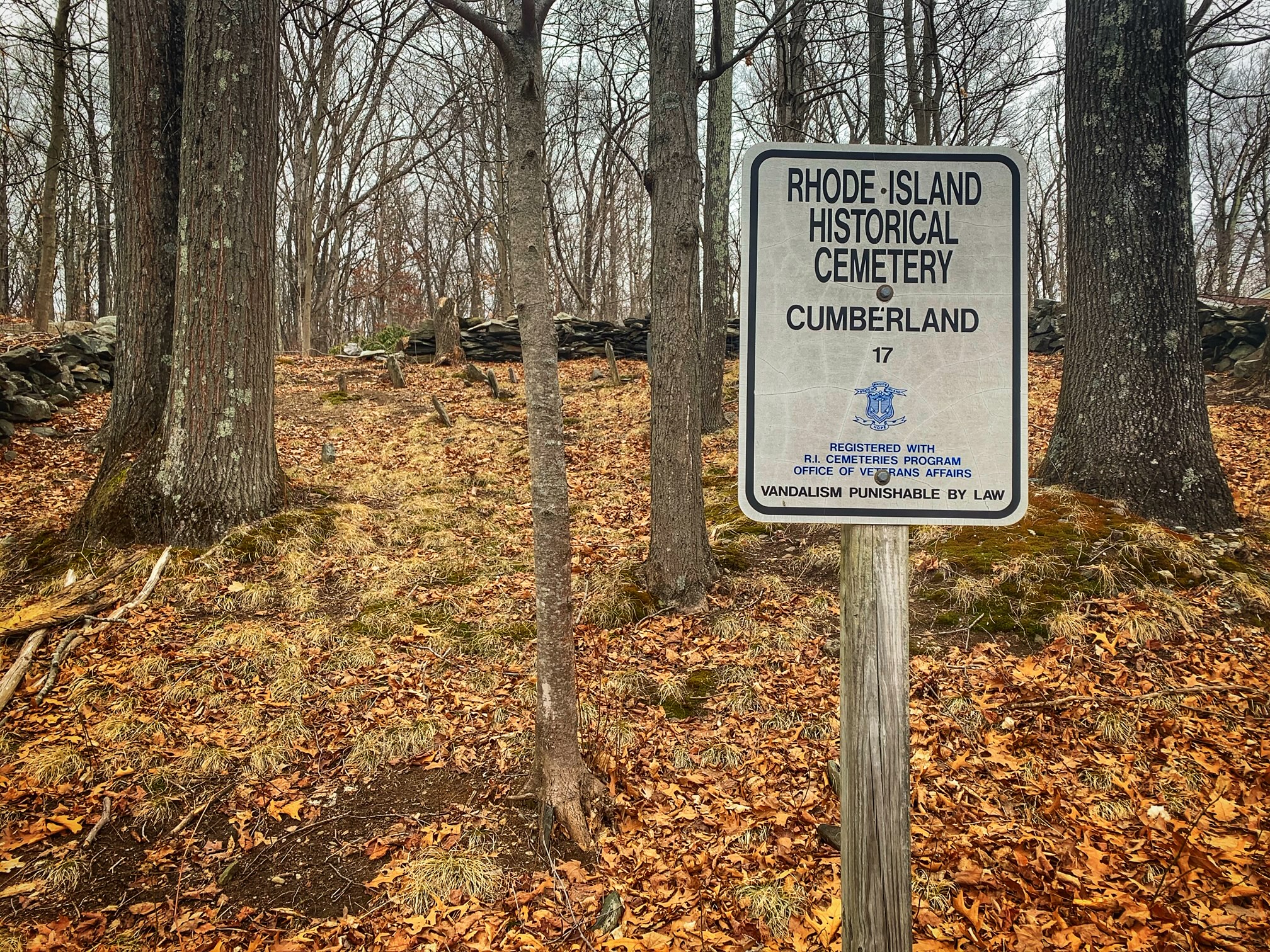 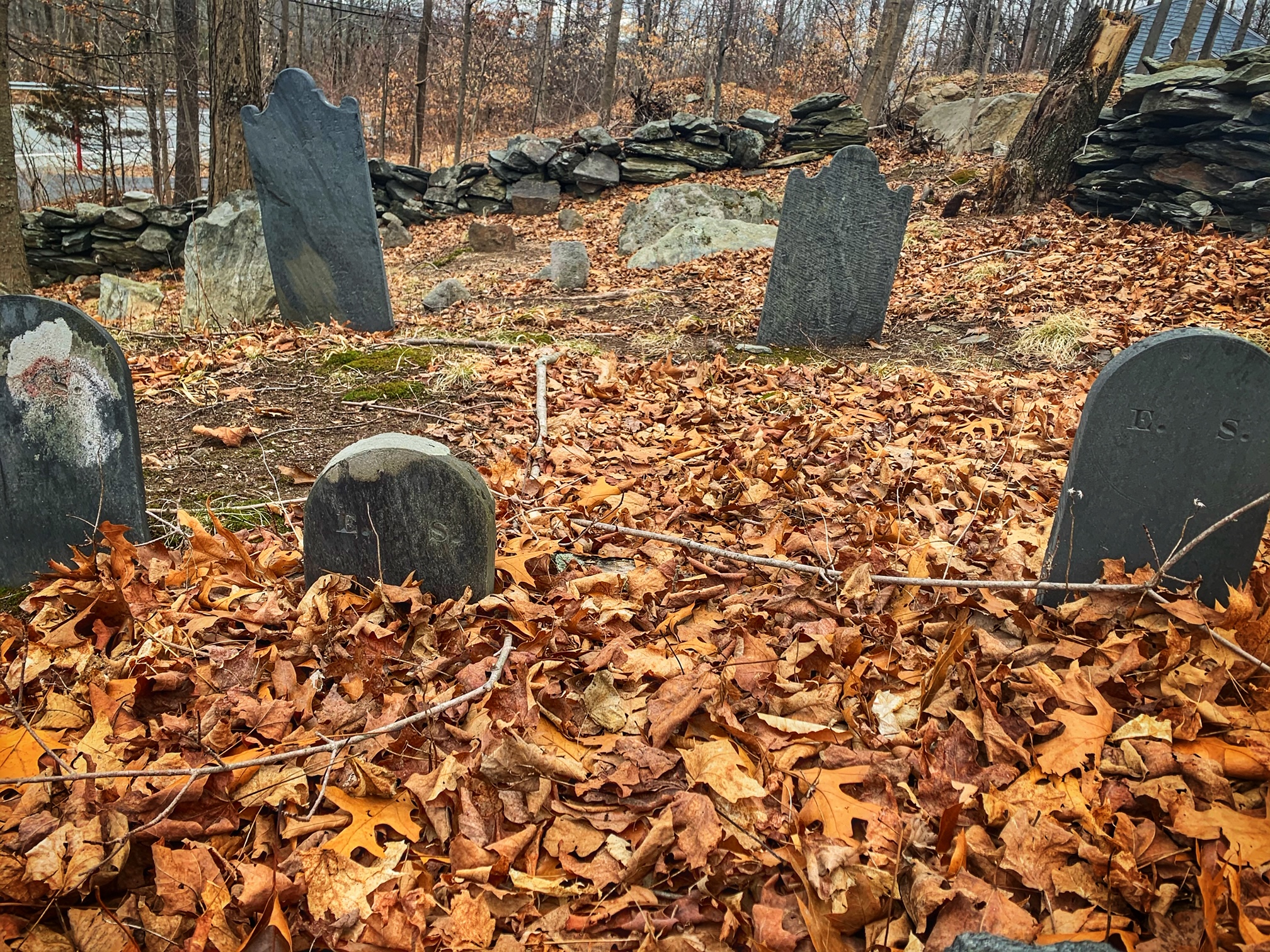 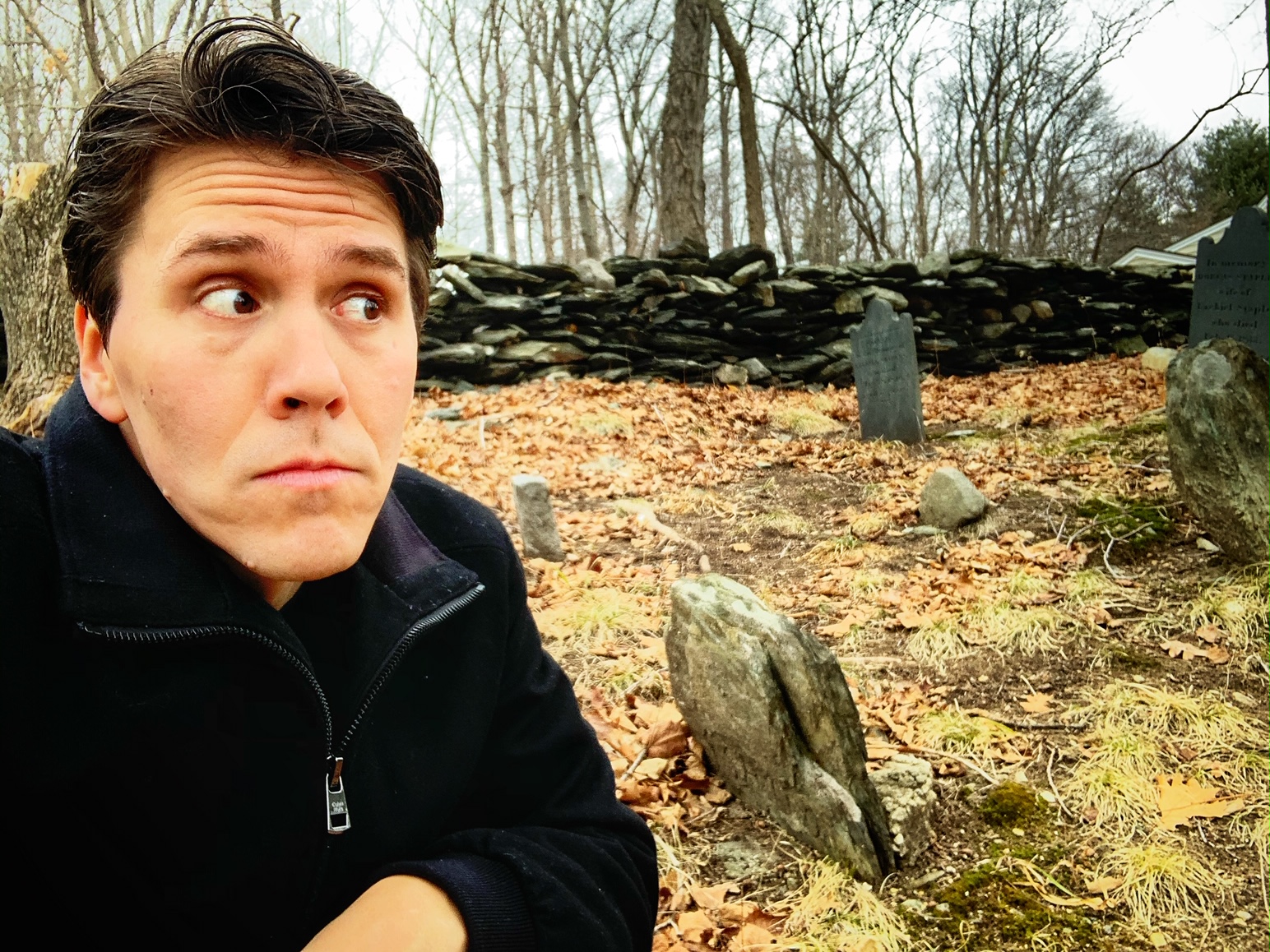 Jeff may have just heard something creeping up behind him…

RAY: Do we really have to be out here at night, Jeff?

JEFF: No, I guess technically we don’t, but there’s something about an ancient cemetery under the moonlight.

JEFF: We’re standing in a little hillside clearing dotted with some tall trees right off of Route 120. There’s an old colonial stone wall standing guard around some small headstones. There’s only a few burials in this small plot.

RAY: I already heard that howl. There are several dead people buried at our feet. So are we looking for a ghost? A werewolf?

JEFF: Neither. We’re here in Cumberland, Rhode Island, searching for Abigail Staples. She was believed to be a vampire.

JEFF: Hi, I’m Jeff Belanger, and welcome to Episode 129 of the New England Legends podcast. If you give us about ten minutes, we’ll give you something strange to talk about today.

RAY: And I’m Ray Auger. Thanks for joining us as we chronicle every legend in New England one story at a time. And we love when you folks get involved. Share your feedback, tell us about your own local legends. Contact us through our Web site at: ournewenglandlegends.com, or call or text our legend line anytime at 617-444-9683. You can also leave our show closing on our voicemail.

JEFF: This episode is brought to you by our growing army of patreon patrons. These folks kick in just $3 per month to help us with the growing expenses associated with producing this show. Plus they get bonus episodes and content that no one else gets to hear. If you want to become a bigger part of this movement, head over to patreon.com/newenglandlegends to sign up.

RAY: Okay, we’re in a small, dark cemetery, on a moonlit night in Cumberland looking for a vampire.

JEFF: You ready to go back in time and try and meet her?

JEFF: That’s when Mr. Stephen Staples approaches the council with a request unlike any they’ve ever heard before.

STEPHEN STAPLES: I pray that I might have liberty granted unto me to dig up the body of my daughter, Abigail Staples, late of Cumberland. She was a single woman, now deceased. I wish to try an experiment on my other daughter, Lavinia Chace, wife of Stephen Chace.

RAY: Wait, wait, wait. He wants to dig up his daughter for an experiment? What kind of horrible thing is happening here?

JEFF: To figure that out, let’s head over to see Lavinia Chace.

RAY: At the home of Lavinia and Stephen Chace, something dark hangs in the air.

JEFF: The thing about consumption is it comes in several varieties. The bacteria gets into your lungs and slowly starts eating away at a person from the inside. There’s galloping consumption that can kill you in a matter of weeks. In other cases, the illness might take months or even years to kill you. And some people just kind of live with it the rest of their lives.

JEFF: In their desperation, they start thinking back to when the illness started for Lavinia. Then it hits them. (PAUSE) Lavinia got sick shortly after her sister Abigail died. At first it seems like only a coincidence. But then they realize there have been signs… strange signs. Stephen Staples explains.

STEPHEN STAPLES: Ever since Abigail’s death, the life seems to be slowly draining from Lavinia’s body, leaving her more frail by the day. She’s been having the strangest visions in her fevered dreams. It’s as if she’s being tormented and smothered each night by a shadowy figure that perches upon her chest, almost crushing her, as if the creature is feeding upon her very breath.
RAY: At first the family believes maybe these are just fever dreams, maybe even something more diabolical, but then one morning Lavinia whimpers in her sleep. She’s clearly in the grip of some kind of nightmare. Her eyes pop open, she jerks her body upright and cries out.

RAY: And then she falls instantly back asleep. The family is unnerved to say the least. Pretty soon some friends and neighbors start whispering about a vampire.

JEFF: This is a time when medical science is making great discoveries almost daily. Newspaper reports are filled with stories of new developments in vaccines and other treatments for the sick and dying. Doctors have some understanding of contagions, how an illness can spread from one person to another, but that doesn’t mean the information has filtered out to us regular folks yet. Plus, even when you explain science to a person, sometimes belief proves even more powerful. And right now, someone believes Lavinia may be the victim of a vampire. And that vampire may just be her dead sister, Abigail.

RAY: Lavinia’s father is desperate. He’s already lost one daughter, and now he fears he’s on the verge of losing another.

JEFF: Let’s head back to Cumberland’s Town Council meeting and see what they have to say.

RAY: It looks like Stephen Staples’s request is causing quite a commotion.

JEFF: It’s an odd request. They’re deliberating and arguing over witchery and sorcery. But many of these councilmen are parents. Some part of them knows if there was one chance in a thousand to save their dying child they would take it. (PAUSE) Oooo, I think they’ve reached a decision.

STEPHAN STAPLES: Oh thank you, councilman. Thank you all.

JEFF: And that brings us back to today.

JEFF: You want the truth?

JEFF: Think you can handle it?

JEFF: The truth is, we don’t know what happened. What we do know is that this ruling on the strange request of Stephen Staples is in the town records for Cumberland.

RAY: And we know this Rhode Island Historic Cemetery Number 17 is still here in Cumberland.

JEFF: Right. And we know because of the meticulous records kept by the Rhode Island Historical Cemetery Commission that there are eight burials here in the Staples Family plot.

RAY: Eight?! A couple of the headstones are obvious and easy to read. But there must be 20 or more fieldstones on this little hillside.

JEFF: Yeah, some are really small, others are larger. I can make out a few letters on this one, but couldn’t tell you what it says.

RAY: It’s kind of sad to think we’re never going to know who most of these bodies are.

JEFF: The earliest burial is 1769, the latest is 1840. We only know four of first names on these stones, and none of them are Abigail or Lavinia.

RAY: It’s safe to assume Abigail is… or at least was… buried here somewhere because she died before she was married. So it would make sense she’s in the family plot which we know existed at least as early as 1769.

RAY: Since Lavinia Staples Chace was married, it’s possible she’s buried somewhere else, possibly with the Chace family, but we found no record of her death or burial plot either. So we don’t even know when she died.

JEFF: So in short we don’t know if Stephan Staples ultimately went through with the exhumation. If he did, did he go through with those quote “experiments?” And if he did that, did they have any effect on Lavinia?

RAY: But I read online how Stephen Chace went mad after Abigail’s coffin was opened. I read something else that said there were scratch marks on the inside of Abigail’s coffin, meaning she was trying to get out.

JEFF: I read that too, but it’s just speculation. We have no idea what happened or if it happened.

RAY: A lot of this story sounds so strangely familiar.

RAY: I believe this makes the third vampire story we’ve investigated, and the second in Rhode Island.

JEFF: Way back in podcast Episode 84, we explored the story of Mercy Brown, the Rhode Island vampire.

RAY: We should point out that Mercy Brown was from the southern Rhode Island town of Exeter, and we’re in Cumberland, right on the Massachusetts border in the north.

JEFF: And the Mercy Brown event took place in 1892, almost a century after Abigail Staples.

RAY: As a quick refresher, Mercy Brown died in January of 1892 and her body was stored in the cemetery keep for winter because the ground is frozen. Three months later her body was pulled out of the keep, they determined the body had moved, there was liquid blood in her heart, so a local doctor removed the organ so her father could burn Mercy’s heart on a nearby rock and feed the ashes to her sick brother Edwin in an effort to break the vampire spell.

JEFF: Sadly Edwin died anyway. But consumption, or tuberculosis, is the culprit in both of these stories. Vampires before the days of Brahm Stoker’s Dracula, were walking corpses who feed on the lifeblood of the living. Consumption devastated families, and created truly desperate times when people sometimes looked for supernatural causes to a contagion.

RAY: I wonder if Mercy’s father, George Brown heard stories of the vampire Abigail Staples a century earlier and maybe that pushed him to try his own… uhhmmm… unconventional medicine?

JEFF: It could be. No matter what, it’s easy for us to look back now and see this stuff as desperate, even insane acts.

RAY: That’s what happens when there’s a plague around. We get desperate. We lose our minds. The news spreads quickly that an infected person is now within our borders or town, and we start looking at each other wondering if somewhere inside that other person there’s a germ that could kill us if we get too close.

JEFF: Plagues have happened before, they will happen again. If medical science can’t give us answers, legend and lore can. And suddenly, we’re on the lookout for monsters.

RAY: It’s amazing how a story from more than two centuries ago can feel like it’s been taken from today’s headlines.

JEFF: And here we are talking about a plague yet again. If you’d like to see some pictures of this little cemetery in Cumberland, head over to our Web site at ournewenglandlegends.com and click on episode 129.

RAY: We also love it when you share these episodes. Tell a friend or two about us, it goes a long way in helping the cause.

JEFF: We’d like to thank Jim Harold of the Paranormal Podcast for lending his voice acting talents this week. Thanks to my wife, Megan Belanger for also getting roped in. And of course our theme music is by John Judd.

VOICEMAIL: Hey New England Legends. This is drummer Fitch Proctor from we’re going streaking in the pub Kings. And if I may say, I’m a bit of a New England Legend myself in my own weird little mind. Anyway, remember the bizarre is closer than you think.