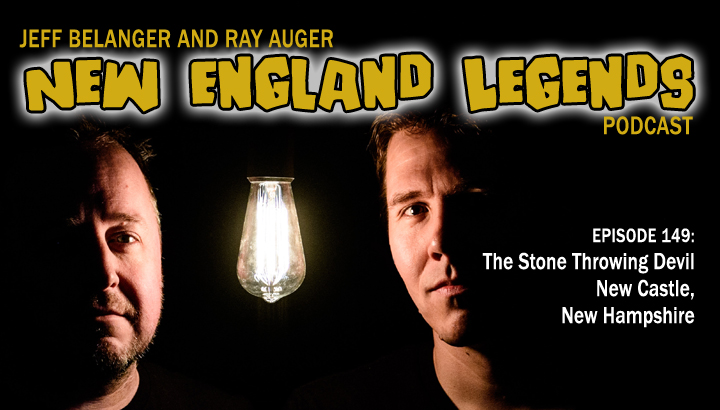 In Episode 149, Jeff Belanger and Ray Auger head to New Castle, New Hampshire, in search of a stone-throwing devil that plagued the home of George Walton for three months back in 1682 according to multiple eye-witnesses. Rocks were tossed, as were pots, pans, and hammers. Windows were broken, and passers-by were pelted with stones. It nearly drove Walton mad. 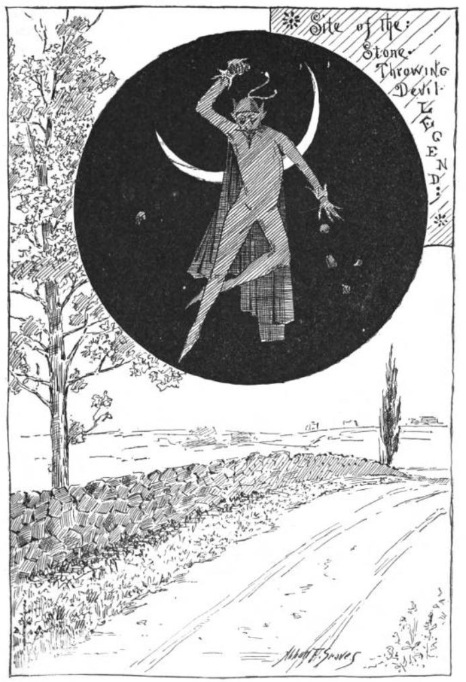 JEFF: Ray, when you were a kid, did other kids ever call you names?

RAY: Sure, kids can be cruel. I think we all experienced that.

JEFF: Remember the old expression, sticks and stones may…

RAY: May break my bones, but words will never hurt me.

JEFF: Right. First, we know words can hurt. But so can sticks, and so can stones.

RAY: What are you getting at, Jeff? And why are we having this discussion in this pretty New Castle, New Hampshire, neighborhood?

JEFF: Because it was here that they say a monster plagued a local home owner with something more than words. Today we’re in New Castle searching for the Stone Throwing Devil.

RAY: And I’m Ray Auger. Welcome to Episode 149 of the New England Legends podcast. If you give us about ten minutes, we’ll give you something strange to talk about today.

JEFF: Thanks for joining us on our mission to chronicle every legend in New England one story at a time. And a big thank you to our patreon patrons who are sponsoring this week’s episode. We’ve got a lot of new projects in the works, and if we’re going to continue to grow, we need more patrons. For just $3 bucks per month you’ll get early access to new episodes plus bonus episodes and content that no one else gets to hear. Head over to patreon.com/newenglandlegends to sign up.

RAY: You can also help us by spreading the word about our show. Post a review on Apple Podcasts, tell a friend or two about us, or join our super secret Facebook group and share your own local stories. We love hearing from you and connecting with you. You can also call or text our legend line anytime at 617-444-9683. We’d love it if you left our show closing on there for us.

JEFF: Very true. We’re a community of legend seekers, and so many of our story leads come from you guys. You should see the interactive map on our Web site of all the legends we’ve covered so far. But there’s always room for another pin in that map.

RAY: So Jeff, we’re near the Frame Point section of New Castle, New Hampshire, searching for a Stone Throwing Devil?

JEFF: That we are. New Castle is just outside of Portsmouth, and there’s the state of Maine just across the Portsmouth Harbor over there.

RAY: It seems like a pretty, seaside spot. I guess I can’t blame the devil for paying a visit.

JEFF: It is pretty. But we’re not talking about one or two stones thrown here, Ray. We’re talking hundreds, maybe thousands. And it drove a man insane.

RAY: It’s June 11, 1682 and we’re at the home of George Walton. Though this is more than just his home, the place also serves as a kind of inn and tavern.

JEFF: I was hoping we might get a beer out of all of this! (PAUSE/AWAY FROM MIC) Two beers please!

RAY: This is kind of a big day. A distinguished guest has just arrived at the Walton Home to stay for a few months.

RAY: His name is Richard Chamberlain, he’s the royal secretary of the Province of New Hampshire.

JEFF: How do you do, Mr. Secretary.

JEFF: There are a few people here to greet Secretary Chamberlain with food and drink. The conversation is polite. But then something strange happens.

JEFF: A few stone pebbles hit the floor near the feet of the guests. No one is hurt, it doesn’t seem all that violent, but it’s enough to turn a few heads downward — mainly out of curiosity. George Walton shrugs, scoops up the pebbles, and tosses them out a nearby window.

RAY: A few days go by, and a few more stones and pebbles hit the outside of the house.

RAY: Now, everyone is paying attention. One time is a fluke, two and then three times is a pattern. At first, George Walton suspects his neighbor is playing a prank on him. He had a recent property line dispute with a local woman, and called her a witch. She replied by calling him a wizard.

JEFF: Woah, this is not the time to be calling people witches and wizards. Salem’s witch trials were just 20 years ago. Those memories are still a little fresh around these parts.

RAY: Very true. And now maybe she’s messing with the Walton family over the insult. But soon, it’s more than just pebbles hitting the roof.

RAY: A rock flew through the window like a bullet, leaving a perfectly round hole.

JEFF: That’s weird! Maybe it was a lucky throw?

RAY: Maybe. But then strange things ramp up inside the home. A round rock, that houseguest Richard Chamberlain estimates weighs about 30 pounds has rolled across the floor inside the house.

JEFF: So that’s not some neighbor tossing things through the window.

RAY: No, and it gets even stranger. As more days and weeks go by, the activity ramps up further. Objects are flying around the house. A hammer is tossed across the room. A pewter pot.

RAY: The cooking spit flies up the chimney by some ungodly force.

JEFF: As you can imagine, this is taking a toll on the mental state of George Walton. This strange phenomenon isn’t happening to any other house in town. Just his. When some folks get curious and approach the house to see for themselves.

JEFF: They’re pelted with a rock by an invisible hand. At some point, Walton has to accept he’s bewitched, or cursed… or both! What must the neighbors think? This kind of evil would only plague a stained man, right?

RAY: All the while, Richard Chamberlain is keeping notes in his journal about all of the strange happenings inside the Walton home. He’s intrigued, sure, but also a little frightened. This is like nothing he’s seen before.

JEFF: Pretty soon, folks are casting their aspersions against Walton. He has two Indian men working for him. The King Philip’s War ended just a few years ago, and tensions with Indians in the north are still high. Preachers have been telling the colonists from the pulpit that these men are minions of satan. George Walton doesn’t see these men that way, but even he must be starting to wonder what kind of attention their presence may be drawing in.

RAY: The other reason some folks in New Castle have issue with Walton is that he’s a Quaker. In short, he doesn’t go to the same church as they do. And all the while, objects are still flying around the house.

JEFF: Ahhh, I get it now. So when locals start hearing about the preternatural activity at the Walton home, it’s easy for them to reach the conclusion that Walton is plagued as a direct result of him being the wrong religion, and employing heathens obviously in league with Satan.

JEFF: Meanwhile, George Walton is on edge all of the time. He’s scared. This isn’t natural. Is his family in danger? Sticks and stones can do more than just break bones. They could kill you.

JEFF: Especially when they travel like bullets through window.

RAY: George is embarrassed, frightened, he’s hardly sleeping, and knows full well he’s bewitched. He begins to publicly blame the neighbor he had the property dispute with. But no one is really buying it.

RAY: Then, after three months of torment…. The rocks stop. And Secretary Chamberlain leaves Walton’s home only to describe the events he experienced in a pamphlet. He writes…

CHAMBERLAIN: This is an exact and true account of the various actions of infernal spirits, devils incarnate, witches, or both. And the great disturbance and amazement they gave to George Walton’s family, at a place called Great Island in the Province of New Hampshire in New England, chiefly in throwing about – by invisible hands – stones, bricks, and brick-bats of all sizes, with several other things, as hammers, mauls, iron-crows, spits, and other domestic utensils, as came into their hellish minds, and this for the space of a quarter of a year!

JEFF: Chamberlain puts this out there as his own testimony. Because there are those who doubt the stories.

CHAMBERLAIN: I wish to rectify the depraved judgements and sentiments of disbelieving persons in this stone-throwing devil.

JEFF: And George Walton never is the same again. And that brings us back to today.

RAY: Okay, it seems worth noting that the phenomenon started when Secretary Chamberlain arrived at the Walton home, and it ended when he left.

JEFF: Yes, that is observant.

JEFF: To give a little more historical context, New Hampshire had just separated from Massachusetts to become its own province. There was talk of turning New Hampshire into a feudal state, where everyone had to pay taxes to the provincial ruler.

JEFF: Secretary Chamberlain wasn’t the only dignitary to be visiting the Walton inn at this time. There were others also tied to the provincial government.

RAY: So maybe there was a political motivation for this stone-throwing attack?

JEFF: Maybe. That could explain the rocks thrown from the outside. But it couldn’t explain all of the strange occurrences inside the house.

RAY: Right, pots and pans flying around, rocks rolling across the floor — that kind of defies explanation.

RAY: Which makes sense because he’s a fire and brimstone kind of guy. If the devil is loose, and leaving physical evidence, then folks around here better keep going to the right church, or they may find themselves the target of more than just words…

JEFF: Nothing like an epic poltergeist to keep you up at night. I love these stories that make you wonder if it could be some elaborate political protest, or something a lot more weird.

RAY: Speaking of wicked strange things, if you don’t already subscribe to our podcast please do. It’s free, and just takes a second. You can find us wherever you get your podcasts.

JEFF: Also be sure to check out our Web site for episode transcripts for the deaf, a legendary interactive map of the places where we’ve covered stories, photos and images related to our episodes, video segments from the New England Legends television series available right now on Amazon Prime, and dates for my on-going and now virtual story tour.

RAY: We’d like to than Carl Hutchinson for lending his voice acting talent this week. A convincing British accent for sure. And our theme music is by John Judd.

VOICEMAIL: Hello, this is David Cabral calling from Raynham, Massachusetts. The Bridgewater Triangle until next time remember the bizarre is much closer than you think. 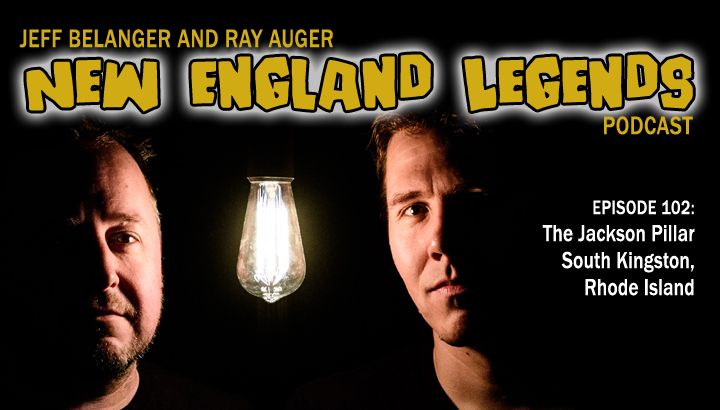 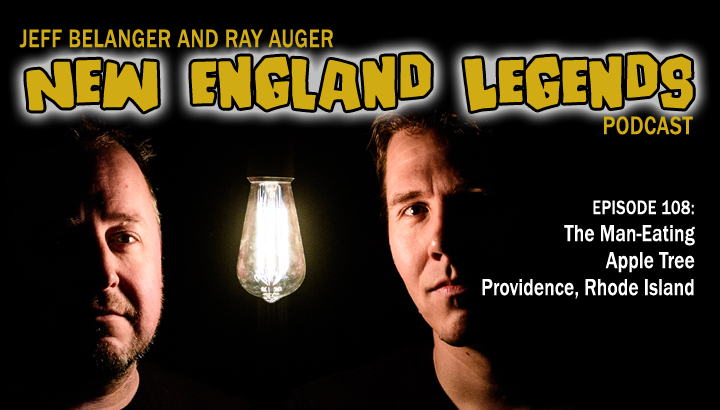