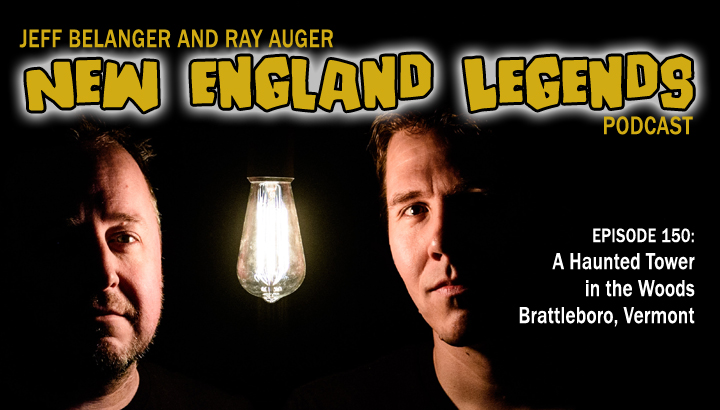 In Episode 150, Jeff Belanger and Ray Auger head to woods overlooking Brattleboro, Vermont, in search of the haunted Brattleboro Retreat Tower. Built in 1887, and towering 65 feet over the hills above town, the tower is said to be home to suicides from the nearby asylum, and now it’s haunted. 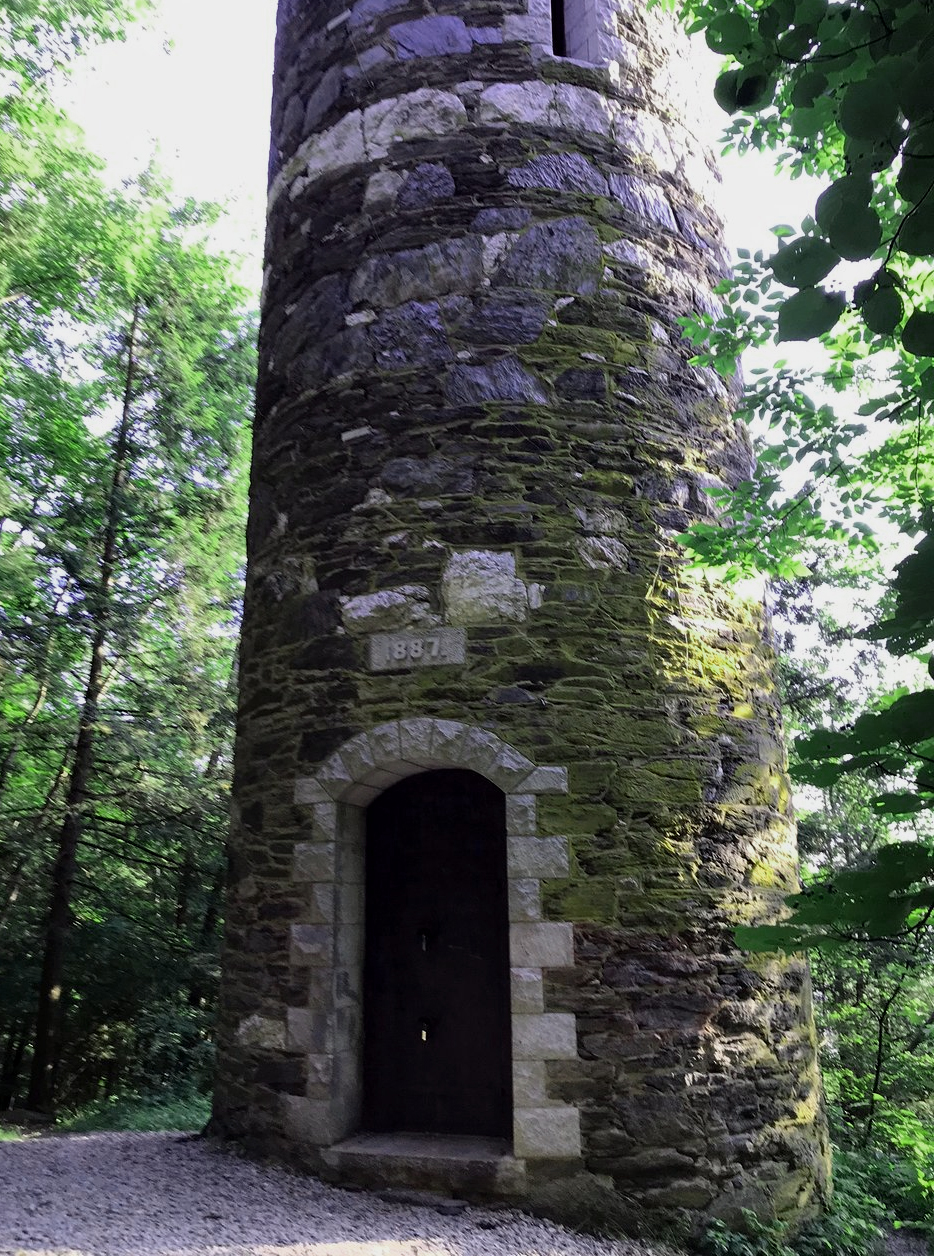 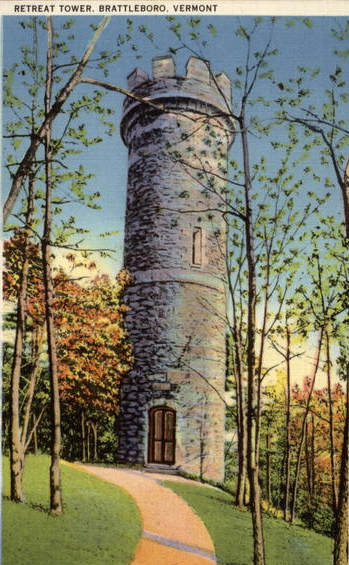 JEFF: I feel like old asylums are universally creepy.

RAY: I know what you mean, Jeff. As we walk by the old buildings of the Brattleboro Retreat center I can’t help but think about some of the poor souls who may have been forced to live here in conditions that were sometimes pretty rough.

JEFF: We’ve mentioned the expression before: there but for the grace of God go I. I think all of us knows somewhere deep inside that if things went differently for us or our loved ones, places like this Vermont hospital may have been the only choice.

RAY: Do you think all of the old asylums are haunted, Jeff?

JEFF: I’m not sure about all of them, but if you believe the reports, this one is, or at least parts of it are haunted.

RAY: Do you think it’s safe to even go inside these buildings?

JEFF: Some of these buildings are still in use as a psychiatric facility. But we’re not going in any of the structures down here, Ray. We’re heading into the woods outside the old hospital searching for the haunted Brattleboro Retreat Tower.

JEFF: I’m Jeff Belanger and welcome to Episode 150 of the New England Legends podcast. If you give us about ten minutes, we’ll give you something strange to talk about today.

RAY: And I’m Ray Auger, thank you for joining us on our mission to chronicle every legend in New England one story at a time. Please hit the subscribe button because our weekly podcast is free and we don’t want you to miss a single story.

JEFF: We’d also like to thank our patreon patrons who are sponsoring this week’s episode. For just $3 bucks per month they get early access to new episodes, plus bonus episodes and content that no one else gets to hear. Our patrons are the backbone of our mission, and we can’t do this without you. Head over to patreon.com/newenglandlegends to sign up.

RAY: There are a network of trails around this old facility. (PAUSE) If we’re looking for the tower, it makes sense we’re taking the Tower Road trail up ahead.

JEFF: It’s kind of hard to miss, isn’t it? It looks like a medieval castle turret.

RAY: And while that’s sad news for her family and friends, there’s a silver lining… or maybe I should a golden lining, because Anna has left the sum of $10,000 dollars to the community in order to build the Vermont Asylum for the Insane. This is the first hospital of its kind in Vermont, and only the tenth to be built in the United States.

JEFF: This facility is patterned on a Quaker concept called moral treatment. This is a bold departure on how the mentally ill are usually cared for.

RAY: “Cared for” isn’t the right term at all. Up to now, many mentally ill people are kept in jails or prisons, or literally locked away in the basements or attics of family homes. It’s awful.

JEFF: The Vermont Asylum for the Insane promises dignity and respect, a family-like atmosphere including work for the patients, good nutrition, and daily exercise. By 1836, there are 48 patients living at the facility located in Brattleboro.

RAY: For a while, things here are good and simple. The staff are delivering on their promise of a human and humane atmosphere, but when you have a good thing…

JEFF: Pretty soon others are going to want in on it.

JEFF: Something else is happening in the mid-1880s, Ray.

JEFF: The 50th anniversary of the founding of the asylum!

RAY: Got it. Making it 50 years, and growing as much as this hospital has grown, means they must be doing something right.

JEFF: Enter Dr. Joseph Draper. He’s the superintendent of the Brattleboro Retreat, and a big advocated for outdoor recreation for his patients. Dr. Draper became superintendent in 1873, and with the 50th anniversary coming up, he lobbies for the construction of a castle-like structure that will overlook the entire hospital campus and surrounding community.

JEFF: Construction begins in 1887. Many of the patients are helping with the building project.

RAY: They find the bricks and stones from local quarries, and start laying the foundation, then brick-by-brick, and stone-by-stone, they continue until… they stop.

RAY: They stop. For five years the project sits on the shelf…

JEFF: Or on the hillside in this case.

RAY: Dr. Draper dies after serving as superintendent for 21 years. Of course his colleagues and patients are sad, but then they think of the perfect way to honor him…

RAY: They get back to work on the tower project.

JEFF: But this time, they see it through. All the way up to 65 feet high complete with 500-pound granite blocks forming the quoins, or the jagged stony rim of the castle turret.

RAY: The view is breathtaking up here, Jeff. I can see downtown Brattleboro to our southeast…

JEFF: There’s the Connecticut River to the east.

RAY: And right there we can see the entire hospital complex. It’s an incredible view up here!

JEFF: Woah, Ray, easy there. Don’t get too close to the edge.

RAY: Thanks for the warning, Jeff. But this wall is plenty high enough. If I wanted to jump from here I’d really have to make an effort.

JEFF: The thing about mental illness, is that it’s difficult to know or understand what’s happening inside someone else’s mind. The torment can be awful, and drive people to do awful things. There’s stories of suicides here, Ray.

RAY: And it will haunt us.

JEFF: Let’s head back down to the facility’s burial ground.

[WALKING IN THE WOODS]

RAY: There’s not a lot to see here. It’s not a big area, there’s a few small headstones. Man, I can’t help but wonder if any suicide victims are buried here.

JEFF: Check out this stone. It’s one of the most visited graves here. The epitaph is haunting.

SARAH: The eye of him that hath seen me shall
come no more. Why hast thou set in
me a mark against thee so that I am a
burden to myself? and why dost thee not
pardon my transgression and take away
mine iniquity? for now shall I sleep in the
dust and thou shalt seek me in the
morning, but I shall not be.

JEFF: She wrote her own epitaph.

RAY: That really sounds like someone who knew her end was near.

RAY: Maybe someone else here died from a jump from the tower?

JEFF: It’s possible, but I can find no record. And that brings us back to today.

RAY: So today people talk about the Brattleboro Retreat Tower being haunted.

JEFF: They do. It has all of the elements. It’s in a remote spot, it stick out, it’s part of an old asylum.

RAY: And when you look at how tall it is, it’s clear that a fall or jump from the top would be fatal.

JEFF: So people assume someone must have jumped, and that ghost still haunts this structure.

RAY: So there’s no record of any jumpers?

JEFF: Not that I could find, but I did find this newspaper article from the June 2nd, 1923 Rutland Daily Herald. It turns out that the day before, the body of Carl Dodge, a Metropolitan Opera House cellist, was discovered right here at the base of the tower. Dodge was being treated for a nervous breakdown.

RAY: He didn’t jump to his death?

JEFF: No, a revolver was found near his body. Still, it was ruled a suicide, and it happened right here at the tower.

RAY: And almost a century later, we’re still talking about this tower being haunted.

JEFF: In the 1980s, some vandals broke into the tower, made it to the top, and pushed of those stone quoins off the turrets. Which only added to the mystery.

RAY: Thankfully, in recent years a local group of masons gathered up the fallen stones and worked to get them placed back at the top of the structure. But still, the haunted reputation lives on.

JEFF: This is one of those unique cases where the legend proves to be mostly true. There was a suicide here by a patient of the mental hospital. Though he didn’t jump from the tower, it doesn’t matter. He took his own life, and he took right here at the base of a tower conceived by a doctor who believed that when mentally despondent people do good work with their hands outside in the fresh air, it helps.

RAY: And this haunted legend has us talking about the important subject of suicide in a place where it’s happened before, near a hospital built and designed to try to keep it from happening again. My hope for all of us is that the ghost of the Brattleboro Retreat Tower continues to haunt us.

JEFF: Friends, if you are struggling with depression and suicidal thoughts, please call the National Suicide Prevention Lifeline at 1-800-273-8255 to get help. We care about and appreciate each and every one of you and want to keep you around for a long time.

JEFF: So true. We love it when you folks reach out to us. You should join our super-secret Facebook group, tell a friend or two about our show, and we’d really appreciate it if you’d post a review of our show on apple podcasts or iTunes. Those reviews are how other people find our show.

RAY: We’d like to thank Lorna Nouigera for lending her voice acting talents this week, and our theme music is by John Judd.

VOICEMAIL: Hi, this is Sandy Nicole from Clinton, Massachusetts, until next time remember the bizarre is closer than you think. 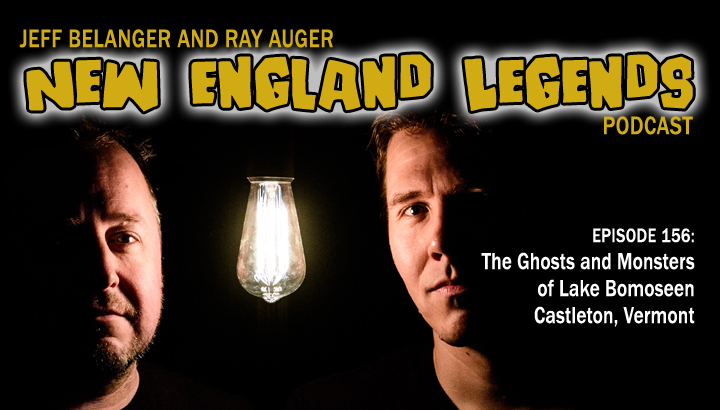