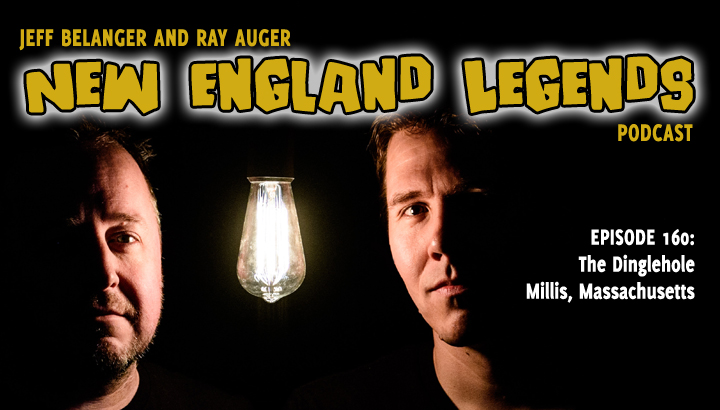 In Episode 160, Jeff Belanger and Ray Auger walk up to a tiny pond in Millis, Massachusetts, they say is bottomless, they also say the devil meets with his minions in this spot as a headless ghost circles the pond after being summoned by hobgoblins. They call this mysterious place now nestled into an unassuming neighborhood: The Dinglehole. 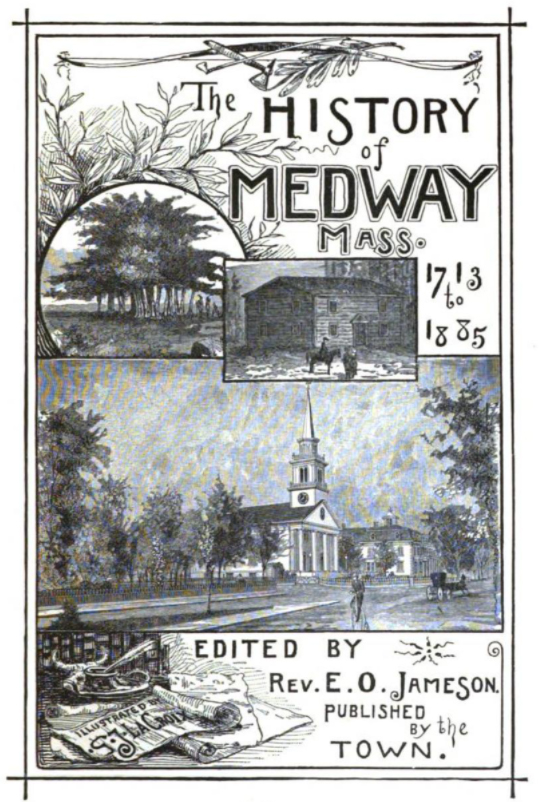 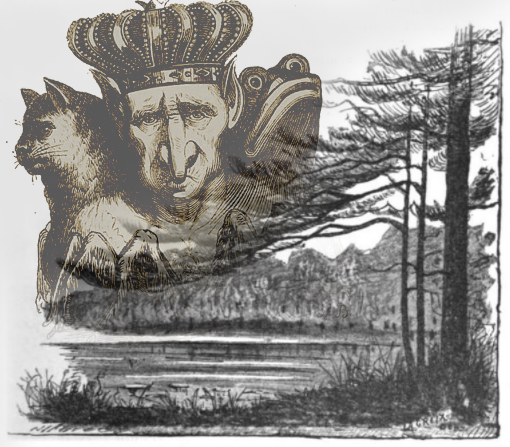 The Dinglehole and the Devil with his minions. 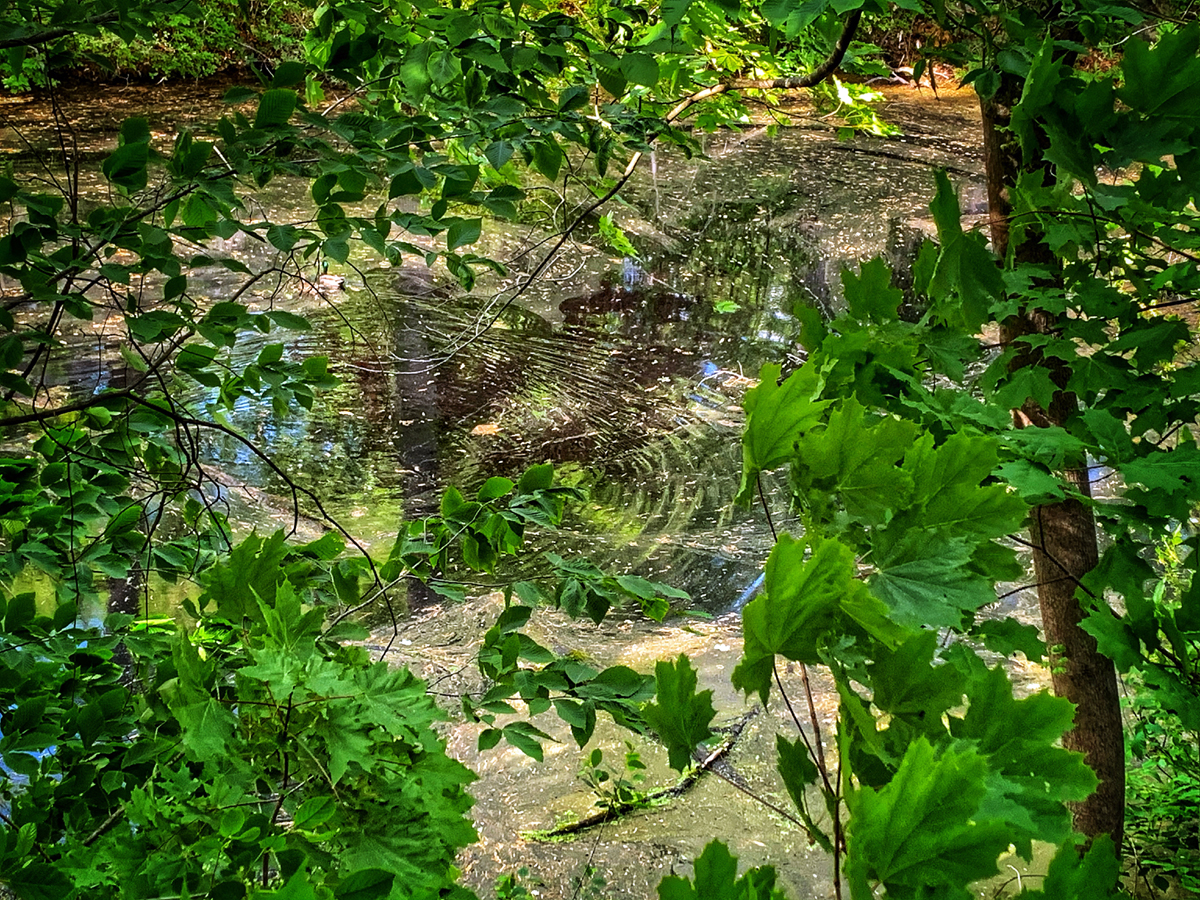 RAY: We’re in the middle of a Millis, neighborhood here, Jeff.

JEFF: That’s right. Looking for a paranormal hotspot that dates back centuries.

RAY: There are plenty of houses all around us. And these houses don’t look all that old. I mean a few may go back as much as a century, but for the most part I’m guessing a lot of these homes date back to maybe the 1960s or so?

JEFF: I’d agree with that.

RAY: What kind of ancient paranormal legend could possibly be set in a place like this?

JEFF: It’s a story of the devil, a headless ghost, of witches who can change into the shape of animals, and the home of a bottomless pit where the most frightening sound you can possibly hear…

RAY: What was that?!

JEFF: Hello, I’m Jeff Belanger, and welcome to Episode 160 of the New England Legends podcast. If you give us about ten minutes, we’ll give you something strange to talk about today.

RAY: And I’m Ray Auger. Thanks for joining us on our mission to chronicle every legend in New England one story at a time. And we can’t do that without the help of our patreon patrons. These legendary people kick in just $3 bucks per month to help us grow and bring you new stories each week. They get early access to new episodes, plus bonus episodes and content that no one else gets to hear. Just head over to patreon.com/newenglandlegends to sign up.

JEFF: If you don’t already subscribe to our show you should, because it’s free. You can get it anywhere you get your podcasts. Just hit subscribe and we’ll bring you a new strange but true tale each week. We’d also appreciate it if you’d post a review for us. It helps a lot.

JEFF: Yeah, that’s what this place is called.

RAY: Somehow I don’t think Jordan Peele is going to call us to turn this episode into his next horror movie masterpiece.

JEFF: The name doesn’t exactly strike fear into your heart, does it?

JEFF: Yet, the story behind it has been told for centuries and… it’s a little freaky. I found this tale in a book that came out in 1885 called: The History of Medway, Massachusetts, 1713 to 1885, edited by Reverend E.O. Jameson, and published by the town.

RAY: But Medway is the next town over from Millis.

JEFF: That’s true, but up until 1885, where we’re standing right now was still Medway. The town lines were redrawn that year.

RAY: Got it. So you said the devil dwells here? Near a bottomless pit?

JEFF: That’s the story. In fact, the bottomless pit is pretty easy to spot.

JEFF: We’re standing right next to it.

JEFF: Some say that pond is bottomless. That’s the Dinglehole! This is ground zero for this story and all its creepy weirdness.

RAY: Okay, I’m ready to check this out. Let’s head back to the year 1713, to the very earliest days of Medway.

RAY: It’s the early fall of 1713, and we’re standing by a small pond located on the edge of Oak Grove Farm. It’s a place that most locals avoid. Reverend Jameson explains why.

REV JAMESON: This place is the rendezvous of witches and of the evil one, the place where Satan meets with his disciples, it’s here they pledge themselves to his service. Unearthly sounds are heard… and strange lights are seen glancing about in this uncanny place.

JEFF: Ray, check out that big pine tree standing over the pond. It looks like the top branches have been twisted into a kind of gnarled crown.

RAY: That’s really creepy. And the water in the pond is black and still. It’s strange how it doesn’t look murky so much as inky black.

REV JAMESON: Its name is derived from the dingling or tinkling of a bell, which is frequently heard here on dark, misty evenings. The bell is supposed to be rung by the hobgoblins of the place, and thence called “spirit bells.”
JEFF: Check out how the road splits to encircle this small pond on all sides. There’s definitely a weird vibe here… and night is falling.

RAY: It is dark out here. There’s no moon at all.

JEFF: Look over there… someone is walking up the road.

[STEPS ON THE DIRT]
[DINGLE BELL]

REV JAMESON: On this particular night, the spirit’s bell was most sonorous. [SFX DINGLE BELL] Strange lights and globes of fire are playing about the Dignlehole.

JEFF: Look at that!

RAY: It looks like tiki torch flames flying over the water.

REV JAMESON: The benighted traveler is astonished and almost petrified when he sees the apparition of a man without a head. The man is unceremoniously walking around the circular road without advancing him a step on his intended journey.

RAY: Okay, I’m freaked out. That man has no head. And it’s not like there’s some bloody stump. I see his shirt, and just darkness where his head and neck should be.

REV JAMESON: It was anciently the custom of the good people in the vicinity of this terrific glen, on approaching the Dinglehole in the night, to say their prayers. It was believed that on the pronunciation of certain words the bell would cease its tinkling, the lights vanish, and the man without a head disappear in the deepest recesses of the woods, and there wait the arrival of a more ignorant or less pious traveler.

JEFF: It looks like this traveler knows the prayers, because the headless man and lights just vanished.

RAY: If the headless ghost isn’t spooky enough, you said this is also the place where Satan meets with his minions?

REV JAMESON: The place is infested with witches, in the shape of raccoons, weasels, and other little odoriferous animals, none of which could be caught or slain by ordinary means.

RAY: So if you see an animal there’s no sure way to know if it’s just a passing critter, or actually a witch.

JEFF: Reverend Jameson told us about another strange account involving a particular witch here at the Dinglehole. Look over there. A well-known local hunter is approaching this strange pond with gnarled pine trees. Suddenly, he sees a large raccoon sitting on a low branch just watching him. The hunter can’t resist such easy prey, so he shoulders his hunting rifle… he takes aim…

JEFF: And fires right at the raccoon.

RAY: It looks like he missed! And not only that, the raccoon hasn’t moved. The animal wasn’t even startled by the gunshot.

JEFF: The hunter reloads as the raccoon watches from the tree branch. The raccoon’s stare is almost mocking! The hunter shoulders his rifle again. He takes the most careful aim he can. He holds his breathe, squeezes the trigger…

RAY: He missed again! I have no idea how. He was so close. And again that raccoon didn’t even flinch!

JEFF: The hunter senses something is wrong here. That last shot had to have hit the raccoon right in the bread box. He knows… HE KNOWS… there’s witchcraft afoot. But look over there by the road. The hunter sees a witch hazel bush growing nearby. Thinking quick, he cuts a sprig of the witch hazel, he loads the sprig into the barrel of his rifle, and once again he takes careful aim at the raccoon. He’s aiming right for the animal’s face. He takes a deep breath, squeezes the trigger…

JEFF: The hunter is perplexed. Though he’s not sure what just happened, one thing is certain. There was witchcraft happening here. Because the raccoon was clearly hit in the head, yet there’s no trace of the animal.

REV JAMESON: The unfortunate raccoon was never seen after this final shot, and it was rumored the following day that Mrs. Murkey Mullen, an elderly and somewhat unpopular lady in the neighborhood, had been badly wounded in the face by some unaccountable accident, which had well-nigh terminated her sublunary existence.

RAY: Locals will tell you Murkey Mullen is just one witch who pledged her loyalty to the devil at the Dinglehole. There are others, which is why you can never be too careful if you see any kind of critter around the pond. And everyone agrees, if you hear the dingle bell nearby…

RAY: Run! And that brings us back to today.

RAY: And now this Dinglehole pond sits among all of the houses. Kids riding bikes, babies in strollers, and guys cutting their lawns.

JEFF: This is one of those obscure legends that not everyone knows. As we said earlier, the story is first mentioned in that 1885 book because that was the same year that town lines were redrawn and Millis was incorporated as its own town.

RAY: So you could be living in this neighborhood, maybe you even heard the story of the Dinglehole, but heard it was somewhere in Medway—the next town over.

JEFF: Right, so you think this can’t be it… But it is. This is the place. A small pond right by the side of the road in modern-day Millis. (PAUSE) And the most frightening part of the tale is that according to Rev. Jameson’s book, those prayers that keep the hobgoblins and ghosts away, have been lost to time.

JEFF: Pretty much. And speaking of ducks, I see two in the pond just down the hill.

RAY: Yeah… am I crazy, or do they seem to be staring at us?

JEFF: That is a little unnerving.

RAY: I think we should get out of here.

RAY: If you want to check out the Dinglehole for yourself, be sure to download our free mobile app on your smart phone! There’s an interactive map offering you driving directions to all of the locations we’ve covered over the years, plus our entire archive of stories, and a way to contact us with your own story leads. Just search for New England Legends in your app store.

JEFF: We’d like to thank Michael Legge for lending his voice acting talents this week. In fact, Michael is the person who first tipped us off about the Dinglehole story, so we’re glad he could be part of this one. And of course our theme music is by John Judd.

VOICEMAIL: Hi, this is Carl Johnson from North Providence Rhode Island until next time remember the bizarre is closer than you think.