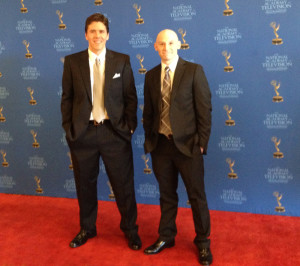 Jeff Belanger and Tony Dunne on the red carpet at the 2014 Emmy Ceremony in Boston.

In 2014, the first episode of New England Legends was nominated for an Emmy. Co-creators and producers Jeff Belanger and Tony Dunne attended the ceremony in Boston on June 7th with high hopes, but the night would not be theirs. Still, not bad for their first episode. This was Dunne’s fourth Emmy nomination and Belanger’s first.

On the ride home, Belanger and Dunne brainstormed about all of the things they will do better in the next episodes. That loss motivated the duo in a way that a win never could. They are committed to producing more and better episodes this year and plan to go back to The National Academy of Television Arts and Sciences next year for the win.

New England Legends is about making great television that profiles the rich folklore and history of New England. It’s about the people and their stories: the very fabric of New England. Belanger and Dunne are honored for the nomination, and even more grateful for those who trust them with their history and deeply personal stories.