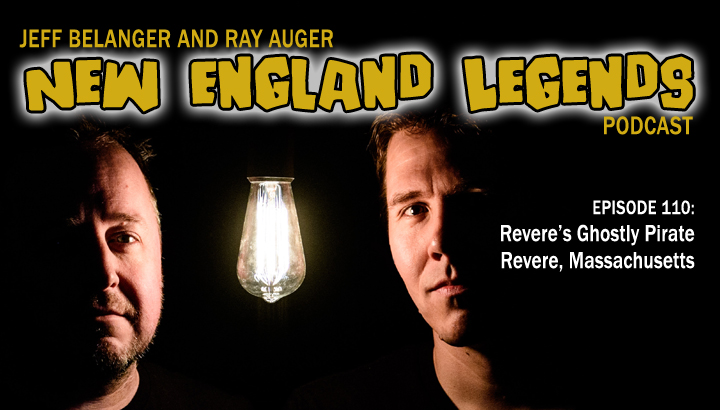 In Episode 110, Jeff Belanger and Ray Auger head to the Point of Pines section of Revere, Massachusetts, in search of buried treasure guarded by a ghostly pirate and his horse. In the 1690s, local Native American leader David Kunkshamooshaw used his witch hazel divining rod to locate a buried pirate treasure near the shore, but what happened next frightened him and his treasure-hunting crew to their core. Some say that treasure is still out there. 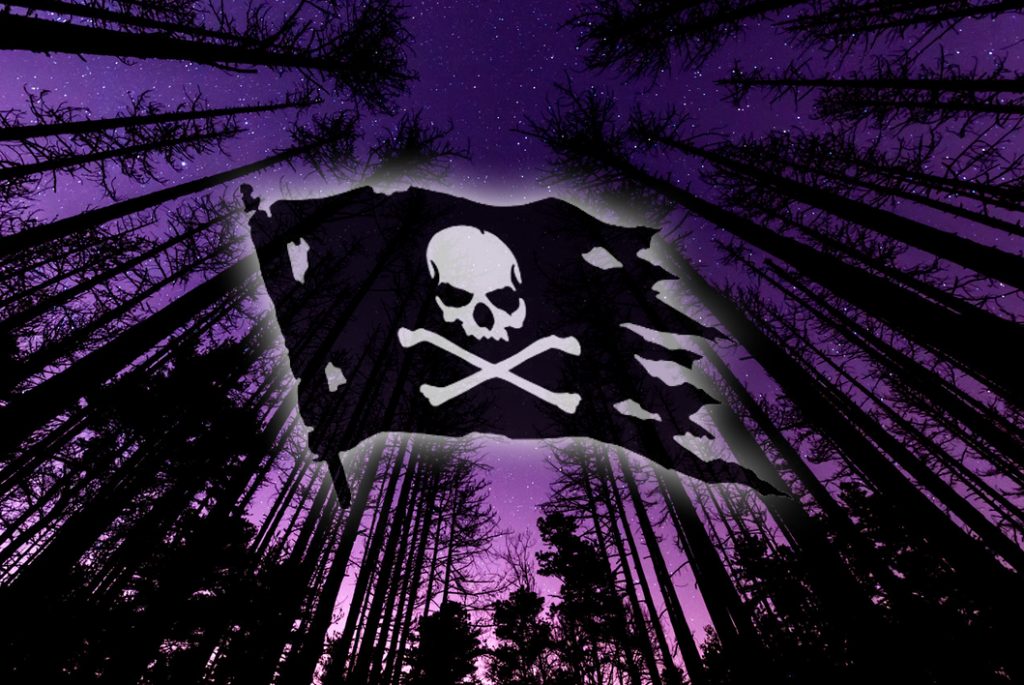 JEFF: This seems like a good a spot as any to park the car.

[SFX DOORS CLOSING]
RAY: Okay, Jeff, I see a baseball field, some tennis courts over there. What are we looking for?

JEFF: Woah, not so fast, Ray. This treasure is said to be guarded by the angry ghost of a pirate and his demon horse.

RAY: And I’m Ray Auger, and welcome to Episode 110 of the New England Legends podcast. If you give us about ten minutes, we’ll give you something strange to talk about today. Thanks for joining us on our mission to chronicle every legend in New England one week and one story at a time.

JEFF: And we couldn’t do it without the help of our patreon patrons who are sponsoring this week’s episode. If you go to patreon.com/newenglandlegends, for as little as $3 bucks per month you’ll get early access to new episodes, plus bonus episodes that no one else gets to hear. These folks are the people who help with our hosting costs, production, marketing, and more. So thank you all.

RAY: We also love when you legendary listeners get in touch with us through social media, our legend line, or when you email us through our Web site which is ournewenglandlegends.com.

JEFF: And that’s exactly what Brendan O’Brien did recently. He works for the Revere Society for Cultural and Historical Preservation and stumbled across a document in his museum describing this pretty obscure legend. We couldn’t help ourselves, we had to dive right in.

RAY: Buried pirate treasure and ghostly horsemen are kind of our thing.

JEFF: So true. We were able to uncover more of the story in the 1880 book, Lin: Or Jewels of the Third Plantation by James Robinson Newhall. Combine that book and the tip from Brendan O’Brien, and that’s why we’re here in the Point of Pines section of Revere today.

JEFF: The year is 1697. It’s a time after the King Philip’s War and the King William’s War, where Native people, now much fewer in numbers than they were a century ago, don’t trust their European neighbors. But there’s still a few living among the colonists who are now taking over the landscape.

RAY: Hey, I see The Anchor Tavern across the street is open. Let’s head inside and grab a beer.

[GLASSES CLINK]
RAY: This is the kind of place where you overhear stories.

JEFF: What kind of stories?

RAY: All kinds of stories. Some local gossip, but also tales of buried treasure. I overheard those guys at the table over there say something about pirate treasure at the Point of Pines.

JEFF: That’s David Kunkshamooshaw, he’s the grandson of Winnepurkit, a great Native American sachem. And though a lot of these locals find Kunkshamooshaw to be abrasive and rude, there’s also some respect there, because many think he’s a kind of a wizard.

RAY: It looks like David Kunkshamooshaw has also noticed that group of would-be treasure hunters in the corner.

[SFX MEN MUMBLING]
RAY: Kunkshamooshaw nods at the men, and they soon agree to set out with their shovels and lanterns. We should follow them.

[SFX DOOR CLOSE CRICKETS/NIGHT SOUNDS]
JEFF: It feels like a good, crisp night for a treasure hunt. But let’s not follow too closely. These guys are likely to think we’re after their loot.

[SFX WALKING THROUGH WOODS/NIGHT SOUNDS]
RAY: I see David Kunkshamooshaw is using a forked witch hazel stick as a divining rod to try and find the treasure.

[SFX WALKING WOODS]
JEFF: Ooo I think he’s found something. Look over there. (PAUSE) Now he’s drawing a circle on the ground around all of the men and muttering something, but I can’t make out the words. It must be another language.

DAVID: Stay inside the circle at all times. It will protect you. And no matter what, you mustn’t utter a sound. This treasure is guarded by a vengeful and evil spirit.

JEFF: And with that, the men dig in silence.

[SFX CLANK ON STONE]
RAY: As soon as the shovel strikes the stone, a strange gust of wind comes out of nowhere.

[SFX DIGGING]
JEFF: It looks like they’ve mostly uncovered a flat slab of rock that could be covering something below. One of the men is forcing a long rod under the stone as a lever. The stone is starting to lift.

[SFX BIGGER WIND]
RAY: A mighty gust of wind just knocked all of them to the ground. I see David is the first to rise. Again, he silently motions for the men to keep at their work. They look nervous.

JEFF: I’m nervous. I feel like we’re too close. (PAUSE) Okay, it looks like they’ve almost got that flat stone lifted up a bit. Wait… what’s that?!

[SFX HORSE GALLOP AND NEIGHING]
RAY: I hear a horse. It sounds like he’s right there at the edge of the circle, but I can’t see anything! David is grabbing each man in the digging party holding his fingers to his lips, his eyes send a message: he’s practically begging them not to make a sound.

JEFF: The men collect themselves and get back to lifting that heavy rock slab. I can see they have it standing on its end now. One of the men is getting low to the ground with a lantern. There’s some kind of metal trunk in the ground. That must be the treasure chest!

[SFX MIGHTY GUST OF WIND]
RAY: This gust of wind is the worst yet. It’s like a mini tornado. The men are flung to the dirt by the force of the wind. Everyone is petrified. Still David is holding his finger to his lips. He’s desperate to keep them silent.

JEFF: And look over there!

[SFX HORSE NEIGHING AGAIN]
JEFF: I can see the horse and rider now. The horse is huge and black. Its eyes are glowing red. It’s moving toward the men in the circle. And the rider. He’s hideous. He’s got long, stringy black hair falling over and around his wretched face. He’s smiling a toothless smile.

RAY: The horse just reared up and now even David Kunkshamooshaw looks frightened. It looks like the rider is furious. Listen!

PIRATE: By my blood, what do ye here? Ye are well set to work, filching my gold, hard earned upon the sea by dagger and by fire. But the devil will yet save his own, I wot. Aroynt ye, or bear a pirate’s malediction!
JEFF: This is more than David can take. He gasps in fear.

[SFX GASP]
JEFF: And with that, the spell is broken. The horse’s hooves land inside the circle, and the men are running in all directions for their lives.

[SFX THUMP]
JEFF: The stone slab has fallen back over the chest below.

RAY: We should get out of here.

RAY: And that brings us back to today.

[SFX TRANASITION]
JEFF: After that frightening encounter, word of the angry spirit got around. David Kunkshamooshaw refused to ever locate the treasure again for fear of facing that demon rider, and with no one to divine the exact spot of the treasure, the story faded into memory and into legend.

RAY: Today there’s a yacht club out here, the sports fields where we parked our car, and hundreds of houses in neat rows. If that treasure is still buried out here somewhere it could literary be in anyone of these backyards and the homeowners would never know.

JEFF: This story first makes it into print in 1880, but it never becomes one of New England’s best-known legends.

RAY: The notes that Brendan O’Brien sent us from the Revere Society for Cultural and Historical Preservation directly quotes some of the text from Newhall’s book, so we’re assuming that’s the source. Then this legend kind floats around in obscurity.

JEFF: It makes me wonder if exploring the story here today will raise its profile to the point where some neighborhood kids here in the Point of Pines section of Revere take some shovels to their own backyards and stir up something sinister.

RAY: If they do find the treasure, I hope they can keep their mouths shut.

JEFF: You’d think that, but his first love will always be the C.

RAY: (GROANS) If you kids do find the buried treasure, do us a favor and at least become one of our patreon patrons. It’s kind of the least you can do.

JEFF: Good point. We love it when you legendary people reach out to us. You can call or text us anytime on our legend line at 617-444-9683, which is just what Matt did from country code 49.

RAY: Country code 49… if my Googling is correct, that’s Germany!

JEFF: Matt texted us on the legend line and wrote: My family and I are stationed in Germany where I work as a flight nurse in the Air Force. I’m from the West coast originally but my family and I have decided to settle in New England when I retire in a couple of years. I stumbled across this podcast while researching New England. My whole family loves this, especially the kids. Thank you for giving us a taste of home. Keep it up!

RAY: Matt, thank you for the kind words and for your service. You keep us safe, and we’ll keep telling you new stories each week so when you and your family arrive in New England you’ll practically be experts on our legends and lore.

JEFF: We’d like to thank Jim Harold from the Paranormal Podcast for lending his voice acting talent this week, and our theme music is by John Judd. 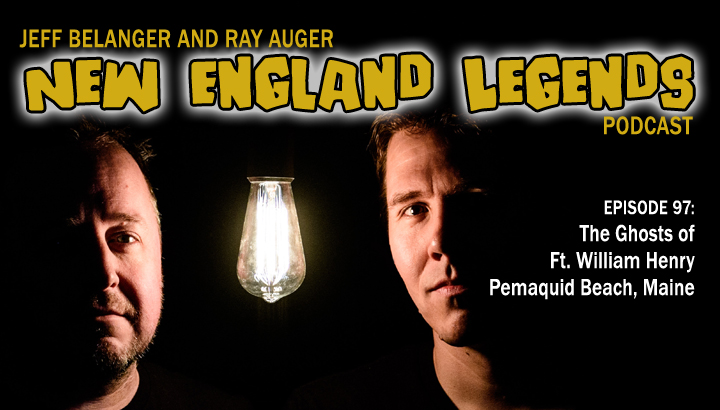