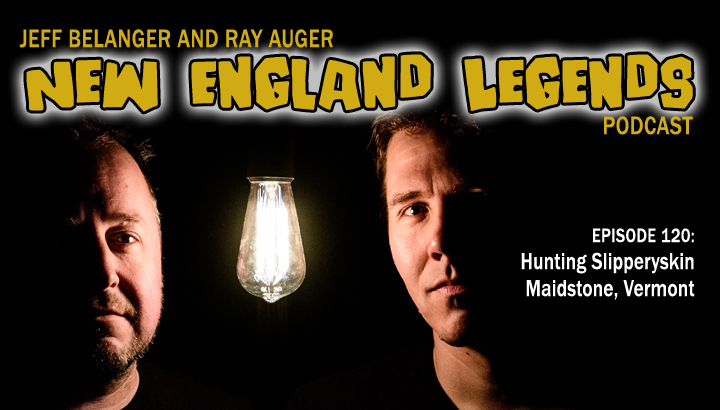 In Episode 120, Jeff Belanger and Ray Auger hike the woods of Maidstone, Vermont, in search of a clever, but annoying hairy beast called Slipperyskin. For generations, this creature, described as a bear who walks on his hind legs, and who torments the people of Essex County, roamed the forest giving everyone who hunted him the slip. Could he still be out there in the Northeastern Kingdom? 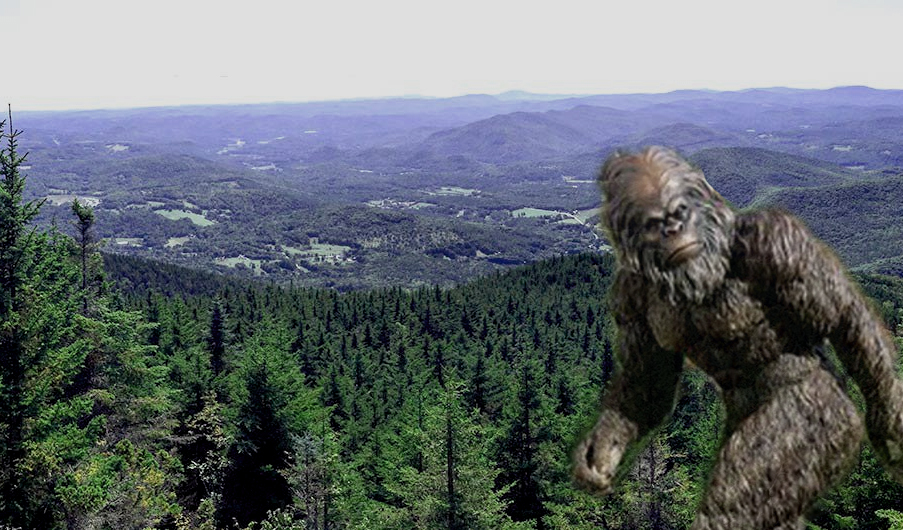 Vermont’s Slipperyskin has lurked in the woods of Essex County for generations.

RAY: Man, it’s getting cold here in northern Vermont. This doesn’t seem like the best time of year for a hike in the woods of Maidstone, Jeff.

JEFF: I get that, Ray. But with winter closing in, all the leaves are down, there’s snow on the ground, I figure this is our best chance to track a monster.

RAY: A monster?! What are we looking for?

JEFF: Ray, today we’re on the hunt for a giant hairy beast, he walks on two legs, and though many have tried to hunt him or trap him, no one has nabbed him yet.

RAY: Are we sure he’s real and not a ghost?

JEFF: No, I guess we’re not. Today, we’re hunting for Old Slipperyskin.

RAY: And I’m Ray Auger, and welcome to Episode 120 of the New England Legends podcast. If you give us about ten minutes, we’ll give you something strange to talk about today.

JEFF: Thank you for joining us on our mission to chronicle every legend in New England. We’re doing that through our weekly podcast – 120 weeks in a row so far — through our television series on PBS and Amazon Prime – Prime members can go watch it right now, and through our Web site ournewenglandlegends.com where we’re gathering hundreds of these strange but true bits of history, legend, and lore.

RAY: And we can’t do what we do without the support of our patreon patrons who are sponsoring this week’s episode. If you go to patreon.com/newenglandlegends, for as little as $3 bucks per month you’ll also get early access to new episodes, plus bonus episodes that no one else gets to hear.

JEFF: So Ray, are you ready to face the cold of Vermont’s Northeastern Kingdom and track down a beast?

RAY: I’m as ready as I’ll ever be, Jeff. So could this thing be a bear?

JEFF: That’s possible, bears can walk on their hind legs, but not very far or for very long, but if we’re to believe the newspaper accounts from the Gazetteer of Vermont Heritage, this creature does things no bear can do. And he terrorized not just Maidstone, but the entire region of Essex County.

RAY: Then let’s grab our hunting muskets and head back to the mid-1700s to set this up.

RAY: It’s 1759 here in northeastern Vermont. The region is a wooded frontier filled with bears, and deer, Indians, and some settlers, all trying to make a life for themselves.

JEFF: It takes a special type of person to face life like this. The type of person who doesn’t mind discomfort. Someone handy with a rifle. Someone who knows the animals and critters of the area.

RAY: That’s true, if you can’t handle the elements, you won’t make it up here very long.

JEFF: Something else that’s happening in the region right now is the French and Indian War.

JEFF: The British colonies are at war with New France in the North and their American Indian allies. New France is greatly outnumbered, and this is all about establishing territory.

RAY: Which is why British Major Robert Rogers is sending some of his Rogers’ Rangers up to this remote area of Vermont. He wants to make sure the British colonies lay claim to all of the land that they can. It’s during a 1759 expedition to the area that the Rangers encounter a bear. But no ordinary bear. This one seems bent on making his presence known to his human intruders. One of the scouts writes in his journal.

SCOUT: Our days and nights found us annoyed, for naught reasons, by a large black bear, who would throw large pine cones and nuts down upon us.

JEFF: That doesn’t sound like something a bear would do.

RAY: No it doesn’t. Bears tend to attack if they feel threatened, or they usually run off if given the chance, because generally a fight with humans isn’t worth the trouble. But annoying people with pinecones and nuts, that’s different.

JEFF: As you can imagine, the scouts talk about this strange bear with other people they encounter. The men from Rogers’ Rangers soon learn they’re not the only ones to have a run-in with this creature.

SCOUT: The Indians also know him, being also disgusted by the beast. They call him Wejuk, or Wet Skin.

JEFF: “Wet Skin,” because every time they set a trap for him, or try to shoot him with an arrow, the bear gives them the slip.

RAY: As decades pass, the legend of Slipperyskin only grows. By the early 1800s, this region of Vermont is growing in population. Though it’s still very much a frontier, some farms and communities are popping up, and Slipperyskin is there to make problems.

JEFF: What kinds of problems?

RAY: Slipperyskin is known to fill maple sap-gathering buckets with rocks. He’ll sneak onto farms and kick over manure piles. He’ll pick up rocks and toss them into farm machines.

JEFF: What a pest! Again, that doesn’t sound like anything a bear would do.

RAY: Some local farmers look out their windows and catch Slipperyskin in the act. They say we walks off on his hind legs.

JEFF: As you can imagine, when you mess with a person’s livelihood, there’s going to be problems. Some of the settlers and farmers fancy themselves expert huntsmen. So they turn the tables to track down the beast. (PAUSE) Some even find him in the woods, they even get a shot off.

JEFF: But they miss. They always miss. It’s as if Slipperyskin knows when the shot is going to be fired and he vanishes from sight.

RAY: Another account explains how an expert tracker followed Slipperyskin’s tracks through the snow and discovered the beast walking backwards in his own paw prints in order to backtrack and throw off the pursuer.

JEFF: It’s now 1813, and word of Slipperyskin has made it all the way to Vermont Governor Jonas Galusha’s desk. Galusha sees himself as a solver of problems.

RAY: And Slipperyskin is just another problem he can solve.

JEFF: He also sees himself as an expert hunter. He figures if he can’t hunt down Slipperyskin, then no one can.

RAY: Okay, I feel the need to point something out here.

RAY: The first sighting of Slipperyskin was 1759, right?

JEFF: That’s the first sighting by a British soldier, but according to the report, the Indians already knew about the beast and had a name for him.

RAY: Okay, fine. So Slipperyskin could be at least a few years older than 1759.

RAY: So I checked, and it turns out Black Bears live up to 30 years in the wild, but the average is more like the low 20s.

JEFF: So you’re saying this isn’t a black bear.

RAY: If we’re talking about one animal, then no, I think we rule out a black bear. This is something different.

JEFF: Governor Galusha views Slipperyskin as an opportunity to win some rural votes. If he can bag the beast it will make him a folk hero!

GALUSHA:Out of my way, boys!

JEFF: The governor cries out to the hunting party.

GALUSHA: I’m bringing him back alive!

JEFF: But Governor Galusha also comes back empty handed…. Annnnd he loses his bid for reelection this year.

RAY: Are you suggesting there’s a connection between missing Slipperyskin and not getting reelected?

JEFF: I’m not saying there isn’t…

RAY: Stories of Slipperyskin continue over the next few years, and the tales of what this creature will do to humans grow only taller. There’s stories of him throwing tree trunks at hunters.

JEFF: I read one where Slipperyskin would squeeze the sap from a maple tree only to throw it at anyone he found tracking him.

RAY: Legends have a way of growing in scale, don’t they?

RAY: By this time, no one really thinks of Slipperyskin as a black bear anymore. By the mid-1800s, they call him half-man, half-bear. Some kind of nightmare creature who defies the laws of man and the laws of God.

JEFF: So is he ever captured or killed?

RAY: No, people eventually stop talking about him, and that brings us back to today.

JEFF: Alright, I love this story. But I can’t help but think of another creature, something more familiar…

JEFF: Bigfoot. Walks on its hind legs. Hairy. It does things like place rocks in buckets that would require the dexterity of a primate at the very least.

JEFF: I checked the etymology of the word “Bigfoot,” it was first used in 1958. So the actual term isn’t that old.

RAY: But descriptions of a creature matching that description go back much further than 1958.

JEFF: That they do. Maybe this comes down to labels. One man’s Bigfoot is another man’s Slipperyskin.

RAY: That could be. So why come out here to Maidstone, Vermont, now? If the sightings stop in the mid-1800s, this is a cold case.

JEFF: That’s the thing, Ray. There are still Bigfoot sightings in this region, and it makes you wonder if we did see some strange tracks, could it be a descendent of Slipperyskin?

RAY: Of all the creatures and cryptids we’ve ever chased, Bigfoot does seem the most elusive.

JEFF: Right. There have been many witnesses over the centuries, but somehow, this giant hairy beast always gives us the… slip?

RAY: I get it… Slipperyskin. Annnd we’re back.

JEFF: We are. And we’d like to remind you legendary listeners that we’re all in this together. If you’ve got a New England story for us to check out, tell us about it! Contact us through social media, through our Web site at ournewenglandlegends.com, or call or text our Legend Line anytime at 617-444-9683. You can also leave our show closing on our voicemail if you want to hear yourself on a future episode of the podcast.

RAY: We’d like to thank Michael Legge for lending his voice acting talents this week, and our theme music is by John Judd.

VOICEMAIL_120: Hey guys this is Patrick from Chicago. And you’re doing a wonderful job. I just want to let you know until next time remember… the bizarre is closer than you think. 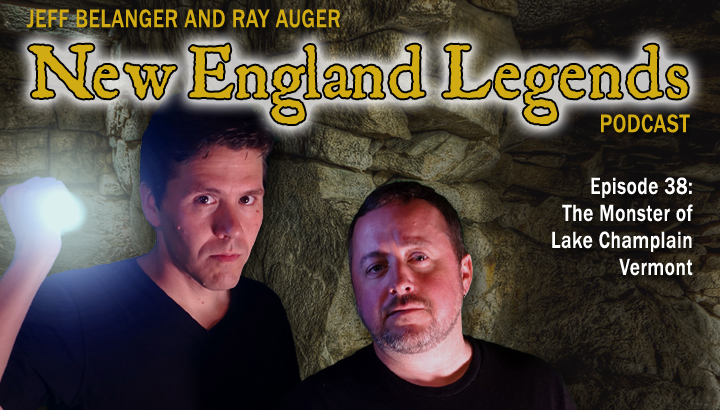