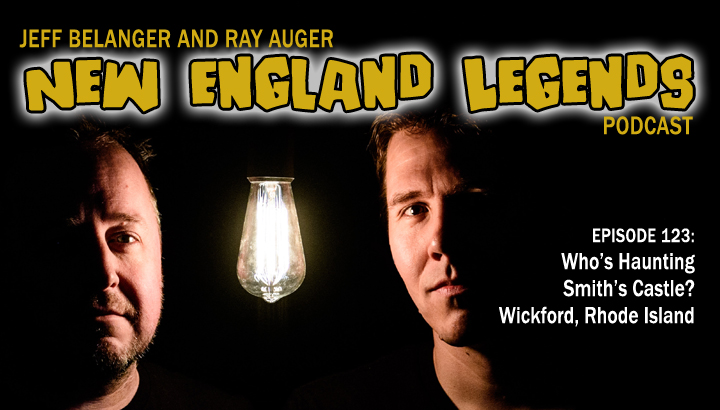 In Episode 123, Jeff Belanger and Ray Auger explore the history and haunting of Smith’s Castle in Wickford, Rhode Island. The earliest roots of this house date back to 1637. The structure and grounds are home to a mass grave, the site of America’s only prisoner to be drawn and quartered, a former slave plantation, and a clumsy ghost who may still be replaying her tumble with destiny. 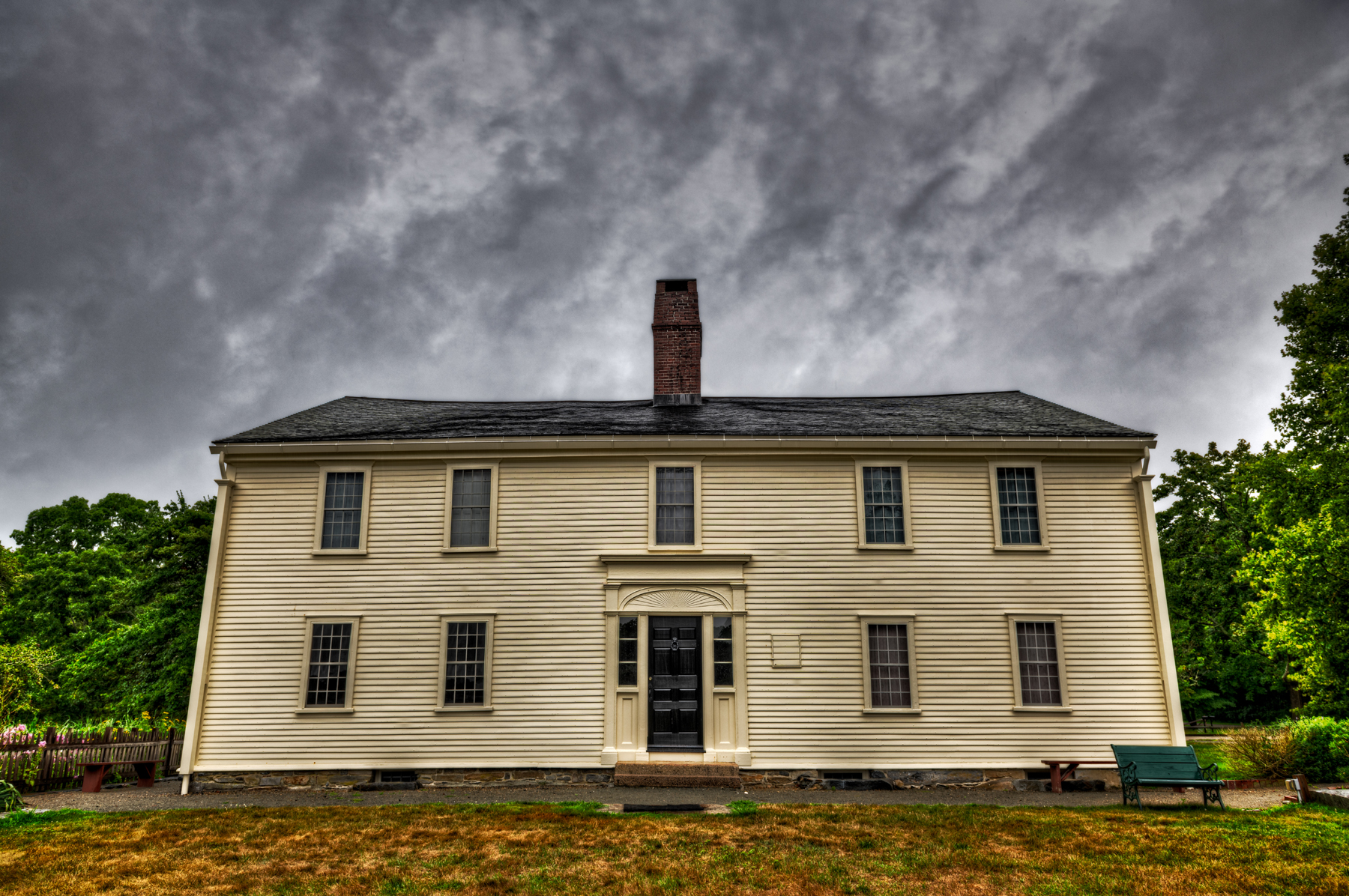 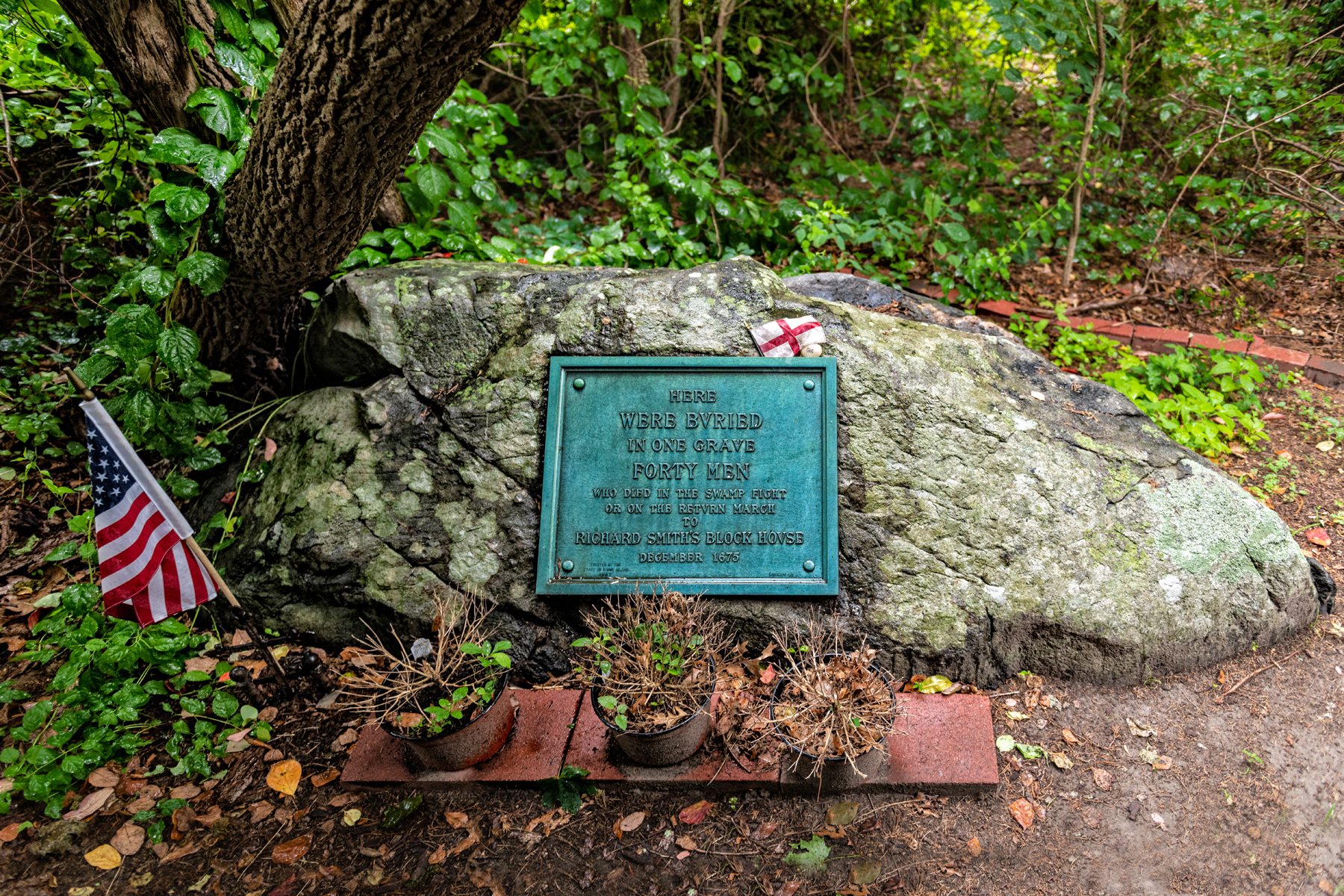 The mass grave at Smith’s Castle. Photo by Frank Grace. 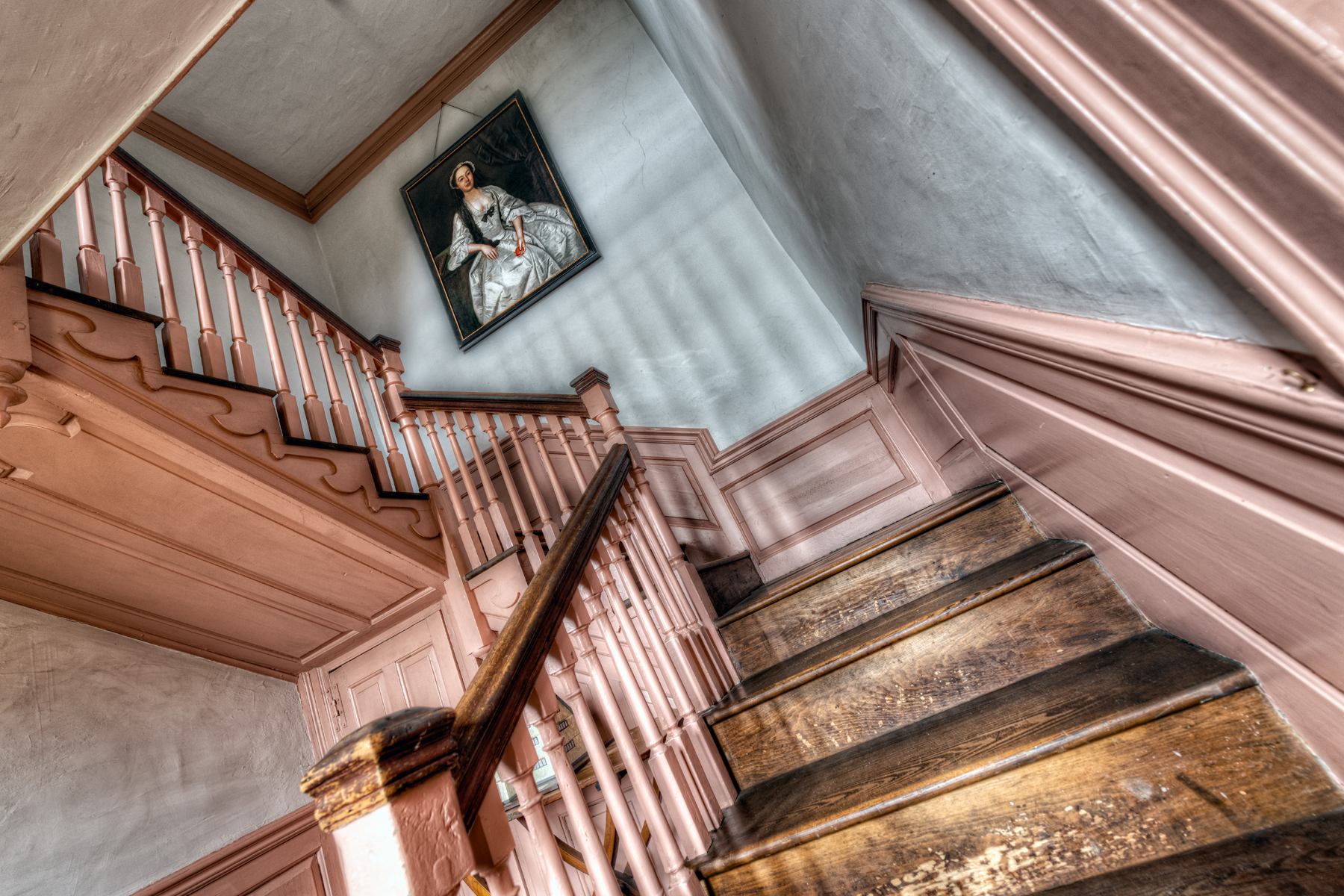 The staircase inside Smith’s Castle where Elizabeth Singleton is said to have met her death. Photo by Frank Grace.

JEFF: Ray! Looking good! Are you wearing a tux?

RAY: A tuxedo-printed t-shirt, yeah. The holidays may be winding down, but that doesn’t mean the parties are over.

RAY: A saw your message that we’re heading to a castle for some swanky affair this week.

RAY: You mentioned something about a formal ball.

JEFF: Yes, but that accounts for just one of the ghosts there. Because Smith’s Castle is definitely haunted.

RAY: And I’m Ray Auger, and welcome to Episode 123 of the New England Legends podcast. If you give us about ten minutes, we’ll give you something strange to talk about today.

JEFF: We appreciate you joining us on our mission to chronicle every single legend in New England. 123 weeks in a row without missing a show in almost two-and-a-half years. And we can’t continue to bring you new stories each week without the help of our patreon patrons. These folks kick in $3 bucks per month to help with our hosting, promotion, and production expenses. If you want to join the cause, plus get early access to new episode and bonus episodes that no one else gets to hear, head over to patreon.com/newenglandlegends.

RAY: Also be sure to join our super secret facebook group where people are sharing strange stories and giving us great feedback and ideas for future episodes. Great things happen when you share these stories. So tell a friend or two about us.

RAY: So Jeff, we’re heading to a castle in Rhode Island.

RAY: When I think of castles, I tend to think of Europe, or if we’re talking Rhode Island, I’m sure you could call some of those Newport mansions castles.

RAY: Well you’re right about that, Jeff. This looks like many two-story Colonial houses I’ve seen all over New England. I mean, sure it’s slightly bigger, it looks wider than most, but I don’t think anyone would label this house a mansion let alone a castle. And you say it’s haunted?

JEFF: That’s what they say. In one corner of the property is a mass grave. America’s original sin still stains these grounds, and Inside is the tragic story of a woman who tumbled to her death. With close to four centuries of history on this property, it’s fair to say there are multiple ghosts here.

RAY: Then let’s head back and sort this out.

RAY: The year is 1637, and we’re standing on Narraganset land. There’s villages all over this region, including one right here. These Narraganset are no strangers Europeans. This guy named Roger Williams has been visiting, learning their language, and making friends.

JEFF: Roger Williams buys this land from the Narragansett sachem, Canonicus. It’s here that Williams establishes an early trading post. Soon after, Richard Smith, a settler from Taunton, Massachusetts, heads south to this area to build his own trading post.

JEFF: Smith also builds a house for his family. Roger Williams writes that Smith built the first English house in the entire region. It’s a large house, and it’s fortified with defenses… and thus the name Smith’s Castle was born.

RAY: After Richard Smith dies in 1666, he leaves the property and house to his son, Richard Smith, Jr. By the mid-1670s, this region of Rhode Island is a dangerous place. Because the King Philip’s War is heating up.

RAY: This bloody conflict is tearing the region apart as Colonists face off against the Wampanoag.

JEFF: So far, the Narragansett are remaining neutral. They see no good outcomes from this war, so they’re trying to stay out of it. That works until December of 1675 while the Narragansett are hunkered down in their winter home in the area of the Great Swamp, just 12 miles away from Smith’s Castle.

RAY: Relations sour when Colonists suspect the Narragansett of harboring Wampanoag warriors in their Great Swamp camp. 1,000 Colonial troops gather at Smith’s Castle and get ready to mount an attack. En route to the region, the Colonists burn empty Narragansett villages as a show of force.

RAY: On December 19th, The Colonists attack the Narragansett camp. (PAUSE) And it’s a blood bath. There are hundreds of casualties on both sides. Whether they like it or not, the Narragansett are in the King Philip’s War now.

JEFF: This battle will forever be remembered as the Great Swamp Massacre. But the hundreds of casualties were not the most gruesome event of this battle.

JEFF: During the battle, Militia soldier Joshua Tefft was caught fighting for the Narragansett. For his treason he was brought back to the camp at Smith’s Castle. He was hanged, drawn, and quartered on this property.

RAY: Oh man, for those who don’t know what this means. The hanging part is pretty straight-forward. Tefft is hanged by the neck until he’s almost dead. Then his body is placed on a table. While he’s still alive his stomach is sliced open. His intestines and internal organs are pulled from his body and thrown on a nearby fire to burn. Next his head is cut off, and his remaining body is cut into four pieces.

JEFF: It’s a punishment that has never been carried out on American soil before or since. In addition to this most brutal of executions, 40 dead Colonial militiamen are carried back to the camp at Smith’s Castle, and buried in a mass grave.

RAY: The following year, the Narragansett burn Smith’s Castle to the ground in retaliation for the family betraying their trading partners and offering harbor to the Colonial militia.

[FIRE BURNING THEN FADE OUT]

RAY: In 1678, with the King Philip’s War over, Richard Smith Jr. rebuilds the family home.

RAY: Smith dies childless in 1692, but wills the house and property to his nephew, Captain Lodowick Updike and his wife, Abigail Newton Updike.

JEFF: It’s worth pointing out that Mister and Misses Updike are also first cousins.

RAY: With so much money coming in, the house receives multiple upgrades and expansions, including a lean-to-kitchen, paneled walls, and check this out.

RAY: This very fancy entry staircase. This place is getting pretty swanky.

JEFF: The house and property remain in the Updike Family until 1804 when the plantation is divided into six properties. After 1812 the property continues to get sold off in chunks to various owners. But still, this house is one of the largest and nicest around. And it’s drawing in the region’s upper crust, especially for the parties.

RAY: Picture this house full of people. There’s butlers carrying trays of food and drinks, maybe some violins playing in the corner.

JEFF: And right over there is Newport socialite, Elizabeth Singleton. She looks incredible in her gown. And she knows it too. Look at her work the room.

RAY: Now it looks like she’s heading upstairs to powder her nose, maybe.

[FOOTSTEPS ON THE STAIRS]

JEFF: I hope she’s careful, those are some low banisters and railings. I mean if her dress should get c…

RAY: No she’s not. Elizabeth Singleton is dead. And that brings us back to today.

RAY: With a mass grave just a few yards outside of this house, a guy drawn and quartered on the property, the horrid practice of slavery here, and a woman tumbling down the stairs to her death, I guess it’s no surprise they say Smith’s Castle is haunted today.

JEFF: No surprise at all. There are many layers of history here dating back centuries. And each of those layers has something to tell us about ourselves. Yet, the most common ghostly sightings center on the inside of the house, especially around the staircase. It’s like that tragic fall replays over and over.

[FALLING DOWN STAIRS AGAIN WITH REVERB]

RAY: It doesn’t help that there’s this portrait of a woman hanging over the staircase.

JEFF: A portrait they say is Elizabeth Singleton overlooking the place where she met her doom.

RAY: It is creepy. Still, I’m surprised, maybe even embarrassed that the ghost most talked about is a socialite who got clumsy on the stairs instead of the people who lost their lives and are buried right outside, or maybe even the spirits of former slaves crying out to be remembered.

JEFF: I get it. There’s definitely a lesson there. But maybe this ghost of Elizabeth Singleton is just innocent enough to draw people inside the museum to ask more questions. And while you’re here you learn about all of the other activity that’s taken place over the centuries.

RAY: Looks and names can be deceiving. When we first got here I expected some stone castle, not a house. When you said it was haunted I expected an army of ghosts, not a woman falling down the stairs.

JEFF: And yet this place IS a castle. And there is an army of ghosts, they’re just not going to great you at the front door. Sometimes, you have to go looking for them.

RAY: If you’d like to see some pictures of Smith’s Castle by the great Frank Grace, then go explore our Web site at ournewenglandlegends.com and click on Episode 123.

JEFF: On our Web site you can find links to our entire archive of shows, plus video clips from the New England Legends television series, which you can watch right this minute on Amazon Prime Video, and there’s also links to our super-secret Facebook group where we have hundreds of other legend-seekers sharing stories every day.

RAY: We’d also love it if post a review on iTunes, those reviews go a long way in helping others find us. And if you have a tip for us, a story idea, some feedback, or if you’d like to leave our show closing for a future episode, call or text our legend line anytime at 617-444-9683.

JEFF: And of course our theme music is by John Judd.

VOICEMAIL: Hello, this is David Cabral calling from Raynham Massachusetts. The Bridgewater Triangle until next time remember the bizarre is much closer than you think.